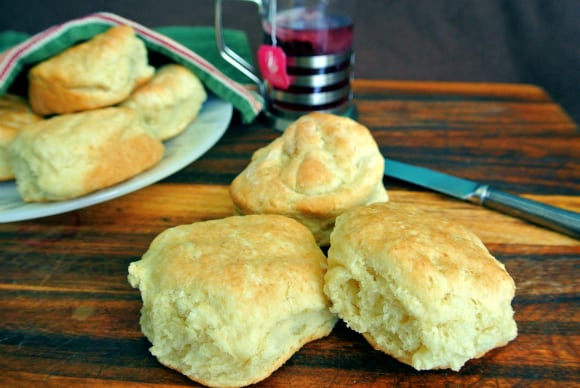 The first biscuits that I ever made were Alton Brown's original biscuits from an early episode of Good Eats starring his late grandmother. That is a good classic recipe that turns out a good biscuit. But what I like about Alton Brown is that he doesn't just rest on his laurels. I believe in always striving to improve my recipes. I think some of the best recipes I have are ones that I worked on over years, changing little things here and there. Alton has done that now with his biscuits. On an episode of the Best Thing I Ever Made, Alton pulls out his current, best biscuit recipe. This one uses a mix of all-purpose flour and whole wheat pastry flour (there is the healthier part!). It also opts for lard instead of butter or shortening. The lard will help make for a flakier biscuit.

Check out Food Network's website to print out the recipe. You can watch a video of Alton making the biscuits. Here are my notes from my experience with this recipe

1. The first time I made these they didn't turn out that well. I saw the episode but didn't make the biscuits for a while. Then I just looked at the ingredients and went to work. I missed a couple steps when I did this - such as folding the dough and placing the biscuits in a round cake pan. I put them on a half sheet pan. Big mistake. They need to be right next to each other to rise the best or they just end up spreading horizontally when they should be vertically.

2. I was out of buttermilk when I made these the second time. So I used Alton's substitute of mixing 1 tablespoon of fresh lemon juice with 1 cup of milk. That worked out fine. 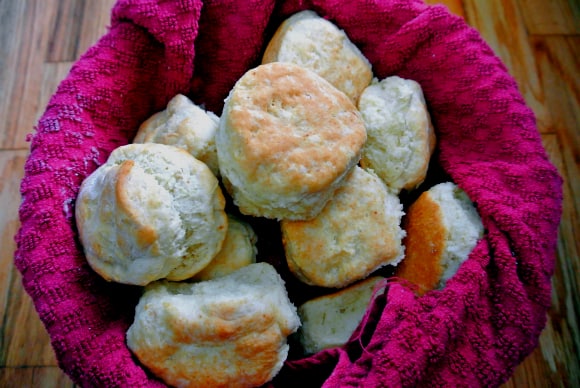 3. I came out with 10 biscuits total, after re-rolling out the dough. I had to squeeze them in to fit them into my 9 inch round cake pan. The one he used in the video had a lot higher sides than mine.

4. I bake mine for around 21 to 22 minutes - were golden brown on top. As Alton recommend make sure you wait at least 10 minutes, so they don't turn out gummy inside.

Alton has definitely improved his biscuit recipe. These have more flavor than the original and a better texture. Kudos for him not resting on his laurels. It also gave me a reason to bring out my honey collection as there is no better use for honey than biscuits.