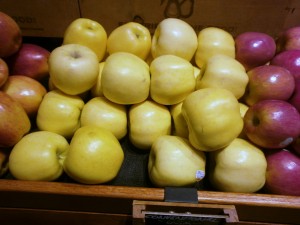 It’s been a while since I reviewed a new apple variety on my site. I have had all the newer varieties available in the winter time with the exception of the one I am speaking of today. At the Fresh Market in Toledo, Ohio, I discovered the Aurora Golden Gala apple. It is a large apple that is a pretty yellow color with some blush in some samples. It’s shape could best be described as globe-like or concial. As the name would suggest one of Aurora’s parents is the popular Gala. The other parent is the Splendour, which is a sweet apple that isn’t popular commercially as the fruit tends to drop before ripening, but it has been used for cross breeding.

The Aurora Golden Gala got it’s name through a nationwide “Name the Apple” contest. When I speak of nation here, I am referring to Canada. This apple originated in Summerland, British Columbia.

The apple is a mid-season variety, that is a really good keeper, much better than a Gala. Which is why I found the apple halfway through February.

Overall Feeling: This is a very crisp and juicy apple. It is also very sweet, but there is a bit of tartness in it. The flavor is rather mediocre at best. Not the best, not the worst. It meets all the requirements that most people seem to want in an apple these days (crisp, juicy, sweet). So I could see this apple becoming a mainstay in grocery stores across this country and in Canada. I would prefer something with a better flavor, but I am not opposed to buying one of these again.

This apple will hold it’s shape when cooked, so you can using it in cooking. Just know it’s a sweet one, so less sugar may be required.

Here are some other unique apple varieties to check out:
Kiku
Spitzenberg
Pinata