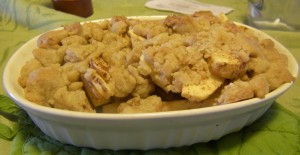 In my quest to follow everything SweeTango this year, I found someone who was wondering: can you bake a SweeTango apple?. So I decided to take up the challenge and see what would happen. Since the SweeTango is such a great out of hand eating apple, most people probably wouldn't think of baking with it. But for the sake of experiment, I sacrifice one of my apples to see how it would do in the oven. I made a single serving apple cobbler. The apples are so large that it really is a large single serving.

Mix these two together until they are well combined then add

Mix again until you form a dough. Then break pieces off and place over your apple slices. Use as much as you want. I had some leftover. Preheat your oven to 350 degrees and when it's ready place the apples in and bake for 25-30 minutes until the topping is golden brown and delicious. I placed a baking sheet underneath my Corning Ware dish, just in case something spilled, so it wouldn't burn on the bottom of my oven.

Final Verdict: The taste is good. My wife and I felt the apple tasted a bit more tart than it was eating out of hand. Now as to the texture of the apple, it held it's self very well when cooked. I was almost say too well. The apple was still a bit crunchy. So if you like your apples in a desert to have a little bit of bite to them, then by all means bake with SweeTango. But if you need them to be more soft, then you might run the risk of overcooking your topping.