This is a review of a Blue Apron meal shipment that I received complimentary. These are my personal opinions and may not reflect the opinions of Blue Apron. Enjoy! The post does contain affiliate links. Also each photo was taken with my Motorola Moto E XT1526 phone. 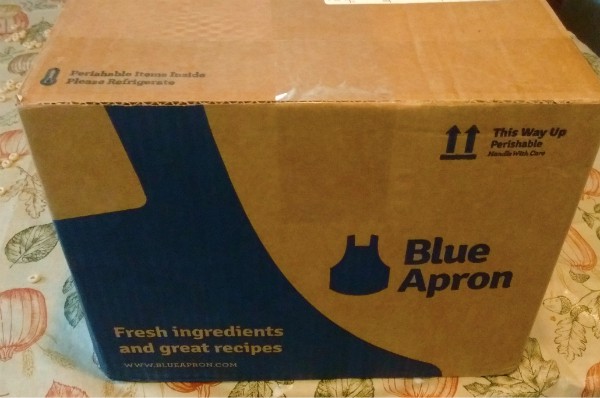 My box full of 3 meals to test out.

I am all for trying the latest and greatest. It's part of my job as a food blogger, I have to do it! If you ever saw me spot a variety of apple I haven't had before you would know how excited I am when new and food come together. I was given the opportunity to try out a food deliver service, Blue Apron. I have never tried any of the service before. They seem to be popping up everywhere like dandelions in the spring. Many of you may have heard of it, if not Blue Apron is a delivery service that is across the entire country that sends shipments of pre-measured ingredients (I can hear a huge yes coming from those who hate measuring!) along with a recipe showing you how to turn these ingredients into a meal. You can order how many meals and what size of family you are serving. And it easy to cancel your subscription when you like and re-start if you like whenever.

I decided to get behind this and give it a try as I like the aspect that you are doing the cooking, not just re-heating something someone send. It helps think outside the box with your cooking - despite that all the food is literally coming out of a box!

I received 3 different meals to try out from Blue Apron. I decided to give the fish the first go as of the three meats I wanted that one to be the freshest and it was more likely to go bad faster than beef or chicken.

I have never had fish with noodles before. Ever! In the past year, I gave shrimp and pasta a try but that didn't work for me. But I was willing to give this combination a try. I do love me some Udon - which is simply a thick noodles made from wheat. Japanese Pan Noodles (containing Udon) is my favorite dish at Noodles & Company restaurants - I need to learn how to caramelize my Udon as good as they do.

Also the pickled cucumbers and radishes on top where strange addition that I would have never tried myself. 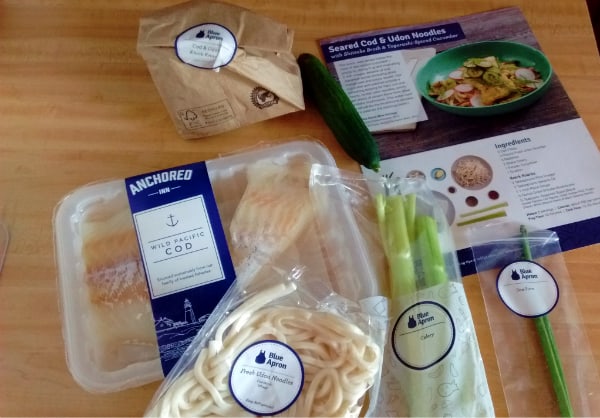 The ingredients ready to be cooked. 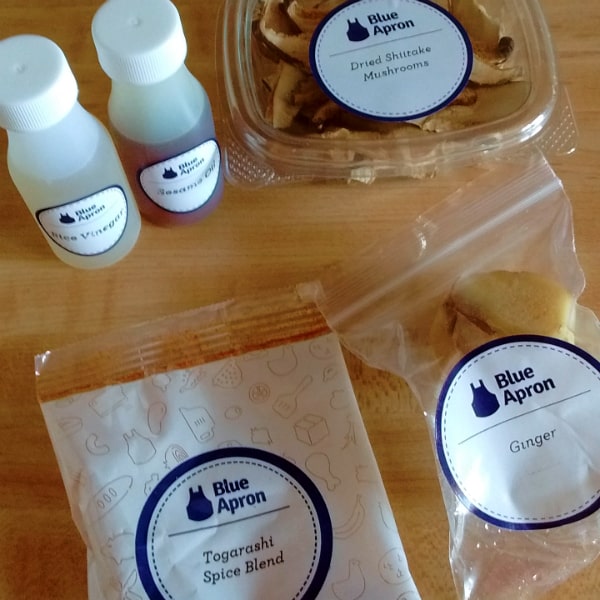 More of my ingredients for this recipe. You just have to look the cute little oil and vinegar bottles. 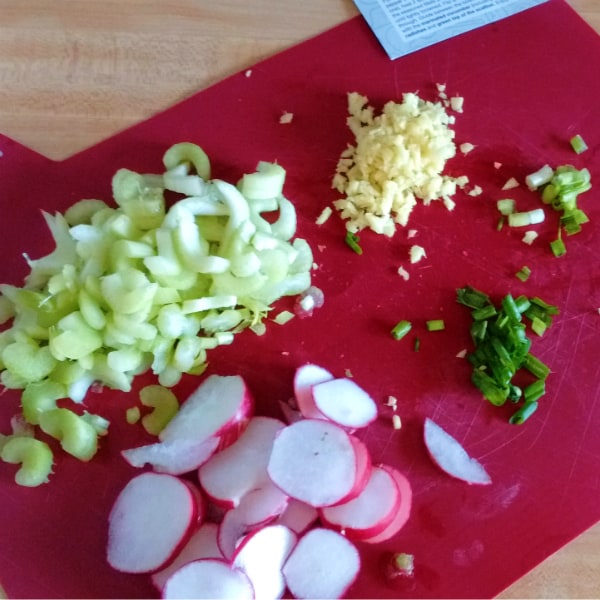 All my veggies are chopped. The hardest was getting the radishes into slices without slicing a finger off! 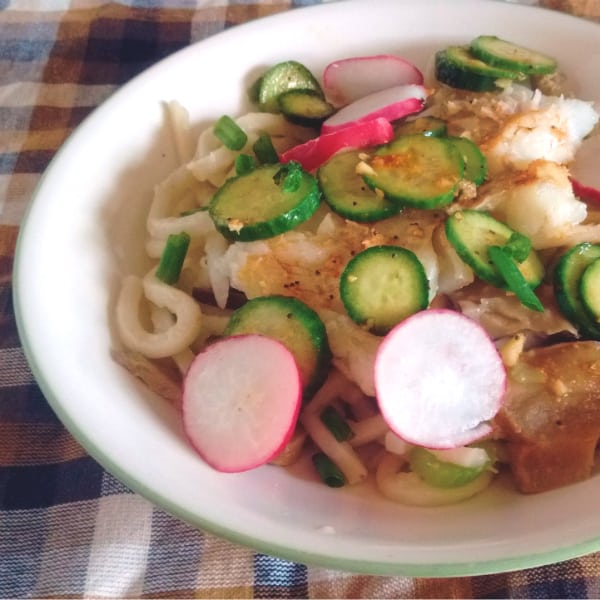 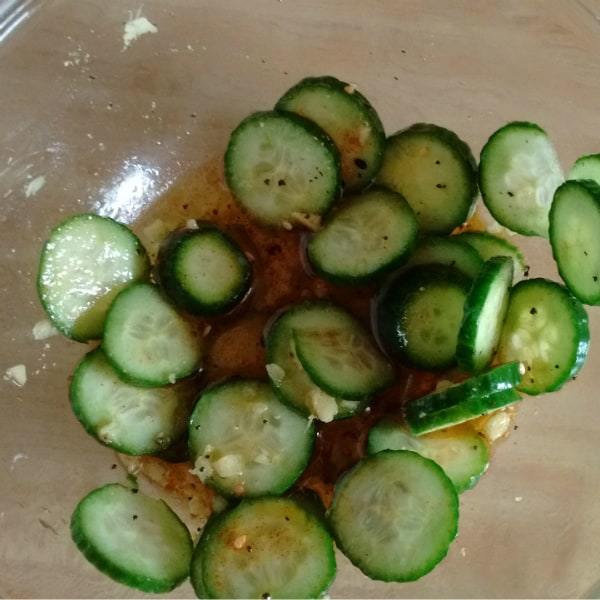 What I Liked About This Recipe

The cucumber actually did work. It was refreshing and added another texture. I especially like the pickling liquid poured on top of the fish, in fact I might try making that mixture just top put on the fish next time. Speaking of that pickling liquid, make sure you season it with plenty of salt. Taste it until it is to your liking. I read the comments on the Blue Apron and there were people saying that the pickled cukes were bland and they are if you don't add enough salt. I felt they were full of flavor. The directions said you didn't have to use all the spice blend, but I felt it needed it all.

Another thing I liked was the sesame oil. I have been using that in my cooking alot over the past year. It is amazing how much flavor it adds, especially toasted sesame oil. A little goes a long way. I am stil using the bottle I got at Trader Joe's over half a year ago.

The cod itself was a good quality. It was super flaky and delicious. Since my non-stick pans are getting worn out my fish stuck to the pan some even with the amount of oil recommended. Time to get a new pan!

The Udon that came with this meal was fresh, hasn't been dried at all. It cooks really fast, you only need a couple minutes - so that is a huge plus. 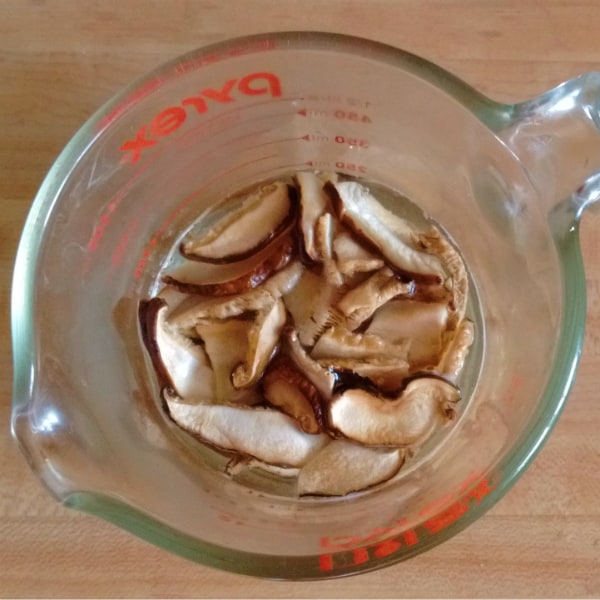 Here are the dried shittake mushrooms being soaked in warm water.

The radishes just didn't do a lot of me. This is not a reflection of the recipe, but I don't like eating mushrooms. I am totally on board for using them for the broth and adding flavor, but to actually eat the mushroom itself - no thanks! The amount of celery was a little bit more than necessary. Also there wasn't much in the way of broth when all said and done, but really I wasn't looking to eat a soup, so it didn't bother me. Any of these things I mentioned are just minor or simply a matter of personal preferences. I didn't find any major flaws in the recipe. Good job, Blue Apron.

If I do this recipe again some day, I would leave out the radishes. I was ok with them being there, but it did't do enough for me to want to add them in. Or if I did want to try radishes again, maybe I would use a Daikon or Watermelon radish and just shred it and put it on top.

The pickling liquid I plan to replicate. I would love to make it just to pour over sauteed fish at right when it's done cooking. It just paired so well together.

If Offered, Would I Select this Meal Again

Yes. It is totally outside of what I normally would do. I haven't had anything quite like it before. I would glad venture out with this recipe again.