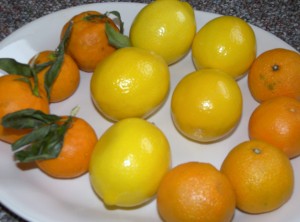 I loved citrus - oranges, mandarins, lemons, limes. All have their place in my kitchen. They represent a group of the most versatile fruit out there. The only downside for me is that they prefer a bit warmer climate than the one I experience in the Great Lakes state. So I have to turn to other areas of the country to get my citrus fix. Florida and California are both top citrus producing states. My eyes turn to these states during the winter months. So how does the crop look this year? I will be answering that question for both of these places, starting today with California.

Last month I wrote a post on when orange/mandarin season begins and end. In it I mentioned that I have heard reports that the Naval orange crop will be smaller this year than last, but still a large crop when compared to other seasons in the last 20-25 years. Now I have a little more information for you. I e-mailed a grower out in California to ask about how their crop was doing this year. Their citrus is grown at Rising C Ranches (located in Orange Cove, California not far from Fresno and the Sequoia & Kings Canyon National Parks). They market their produce under the name "Ripe to You". I have found a lot of their citrus at Plum Market in Ann Arbor, Michigan. They are dedicated to picking fruit at it's peak. They wait for the right coloring on the citrus and for the brix levels to be high enough. I can say that everything I have bought with their sticker on it has been of the best quality.

Here is some information they gave to me:
1) They had a mild spring, which led to their season giving off to a late start. They estimate they are about 3 weeks later than some previous years.

3) Their heirloom navals are expected right around the end of December, along with the Moro blood oranges. Both seem to be smaller in size than usual this year. Seville sour oranges are also expected at this same time.

4) In mid to late January they are expected to harvest their limequats, Page mandarins, Cara Cara navels, and Minneolas.
.
Obviously depending on the area, citrus varieties will ripen at different times. This is just meant to be a glimpse of how this citrus season may go, based on one particular farm (but it's a farm I love to support!)