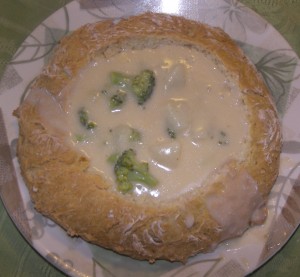 I was looking for something to serve my wife for dinner this week and I was thinking of making her cheesy potato soup, which I had not done in a while. But instead of relying on a previous recipe I decided to come up with something different. Which got me thinking, she likes broccoli & cheese soup, so why not combine potatoes and broccoli into one soup. So here is what I came up with.

Start by bringing your 4 cups of vegetable broth and the potatoes to a boil in a large pot. Once it reaches a boil, cover, and turn down to low and simmer for about 15-20 minutes until the potatoes are soft. Take half of the soup and pour into a separate bowl or pot, using an immersion blender

, blend the soup until it is smooth. We are only doing half of the soup, because I like to keep some chunk of potato in the soup, but you can blend the whole thing if you don't want any chunks.

Add the blended soup back to the pot and then add the broccoli, half and half, white pepper, and your thickener. Bring to a boil and then reduce and simmer until the broccoli is soft. Stir often. Then slowly add the cheese, being careful to make sure it melts and is mixed in evenly. Now you can serve in a bowl or even better a bread bowl.