Want to pick up your leg of pork for Christmas at Costco? Ham that famous salt, smoked, and cured pork leg is available at your local Costco. I am going to give you the insight scoop on which ham you should buy for holiday dinner table. The selection and prices are taken from the Ann Arbor, Michigan store on Wedneday, December 16th. 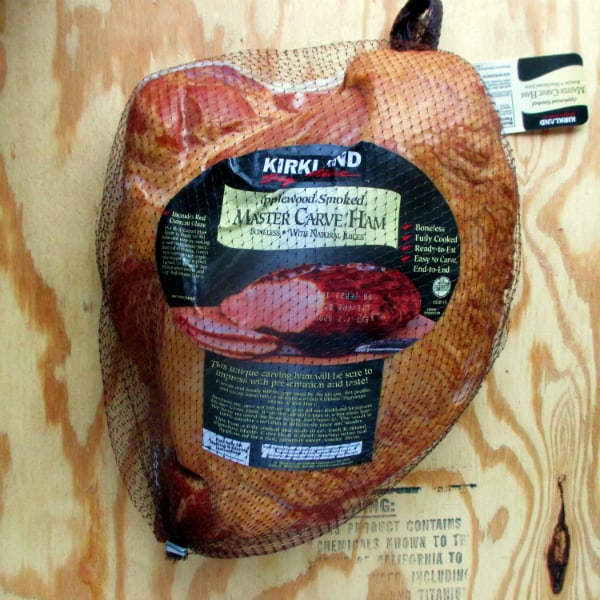 Kirkland Master Carve Applewood Smoked Boneless Ham | $2.49/lb | Click here for my review
This is not the ham you think of when you think boneless ham. Most boneless hams are pressed into a log shape. This has not been pressed. The bone has been removed, leaving you with an almost heart shape looking, flat piece of meat. This ham has been smoked with applewood chips and comes with a red currant glaze. This ham is fully cooked, so you could slice it up and then pan fry it to get some nice carmelization.

Which Ham Do I Recommend
No doubt I would go with the Master Carve ham. I bought one myself to review it this week and found that is a real quality ham that is very tasty and not overly salty. The ham is so easy to slice, there is no need for a spiral sliced ham. Plus 100% of the meat with the Master Carve is usable meat, so even thought you are paying $.50 more cents a pound for you, you will end up with more meat for your money. Also I prefer the taste of applewood smoked meats over hickory smoked meats. The only reason I might go with the spiral spliced one is if I really wanted that ham bone for soup making afterward which is a legit reason to buy it. As for which ham I think will taste better, definitely the Master Carve.

In Natural Juices
You find that both of these hams say "in natural juices" on the package. According to the Food Lab from Serious Eats, a ham in natural juices contains 18.5% protein and up to 7-8% added water. Most of your really cheap hams will contain almost three times as much added water.

While you are at Costco, make sure to look out for these cheeses that are all under $5 per pound. Great for any holiday party.