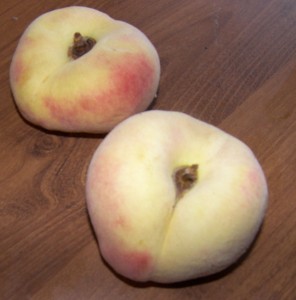 Ever been to the supermarket and saw some peaches that look like someone sat on them? You might have been looking at a donut peach. One variety of donut peaches is the saturn peach. They are a peach that is more flat, less round than your everyday peach. Their flesh is white and it is said that they have less acid than other peaches. Some people like them because they are smaller, so they are easier to eat out of hand, without having to slice them up first. People also say they are sweeter. My sample was pretty sweet considering it came off the tree far from where I am. Before I ate my donut peach I placed it in a brown paper bag for a couple days. This is to help soften the peach, it does not ripen it (ripening indicated an increase in the amount of sugar).

The donut peach originated in China, which is where the first peaches were found. The donut peach came to the United States in the late 1800s. They never gained much popularity and almost disappeared, but they made a comeback starting in the 1990s. Since they aren't as popular as other varieties they can be harder to find, and come at higher price. You also tend to only find them during the peak US peach season, which starts sometime in June and ends in early September.

As to where in the US they grow donut peaches, most of them are grown in California, but I have seen them grown on a small scale in Michigan.

Where is the best place to buy a good peach? Click here to read my article on shopping for peaches.

Previous Post: « Q & A – What to Do with Wando Peas (Recipe)
Next Post: Q&A - Are Blue Lake Green Beans Good for Freezing? »