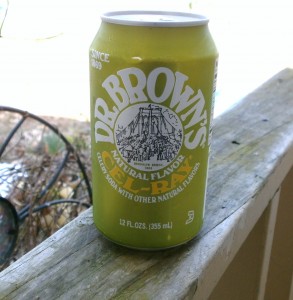 When it comes to flavoring soda, roots and fruits are the most often used flavors. Vegetables aren't really something we think when it comes to carbonated drinks. That is why you might be surprised that there is a celery soda and that this celery soda has been around longer anyone who is reading this. Dr. Brown's first made their celery tonic in 1868! It took a few more decades to get the name "Cel-ray". Suripisely there have been other celery soda, but this is believed to be the only one that is still made.

The ingredient list for this drink reads like this: carbonated water, high fructose corn syrup, citric acid, extract of celery seed with other natural flavors, sodium benzoate and caramel color. The celery flavor comes from an extract made from celery seeds.

It took me a long time to finally try this soda. I saw in many times before, but never wanted to fork over the money for a 6-pack. Recently I found someone selling single cans, making the perfect opportunity to try it without the commitment of a 6-pack.

I wasn't sure what to expect from this drink. I am not all that fond of celery in the raw state. When I popped open the can I was greeted with something that distinctively smelled like celery. I sipped it and my tongue was greeted with the taste of sweet celery. It was actually surprising like good. Similar to a ginger ale. It was similar drinking experience to drinking ginger ale but instead celery.

Where to Buy
The drink is more popular in New York City and any place that has a high Jewish population. It is a kosher drink. I find that Dr. Brown's sodas are easier to find during the Passover time of year. Here are some stores I can confirm were carrying the drink:

Let me know if you have any more stores to add to my list.

You can also purchase it online through Amazon's website