Home » Uncategorized » Food For Our Brood- My Breastfeedng Story

Today the Food our Brood ate:

Breakfast:
Grace and Faithy: Whole O's with milk
Little Guy: Bottle when he woke up, then plain whole yogurt with probiotics and Whole O's.

Snack:
Grace and Faithy- Mama Maria's Gluten Free pretzels. They don't need gluten free, but this ensures that if crumbs fall on the floor and Little Guy gets them, it wont hurt him. He's fully crawling now, and putting EVERYTHING in his mouth!
Little Guy: Bottle

Dinner:
Grace and Faithy- Moroccan inspired pot roast served with roasted carrots, celery root and parsnips over whole wheat cous cous, green and wax beans, sliced strawberries. This dinner was a big hit! I never know...but they both loved it. I tore Faithy's meat into microscopic pieces and mixed it with the cous cous and she didn't even know it was there! She ate a few of the veggies as well. Grace ate everything, even though she said "I don't want to eat these carrots, but I know they'll make me strong!"
Little Guy- Leftover tamales from last night. Since we didn't make them spicy at all, he was able to eat them....and he chowed down! The masa is nice and soft and the meat is so tender that he managed the pieces with no problem. He was mad when it was all gone! Bottle before bedtime.

If you've read my posts, you will notice that our 8 month old son Elijah is not breast fed. I have to feed him formula, and not by choice. I have been down the very difficult road of desiring to exclusively nurse my children, but being unable to do so because I have a condition called Insufficient Glandular Tissue. Basically my body does not have the normal ammount of milk producing glands that it should--so I can not produce a normal amount of milk either. 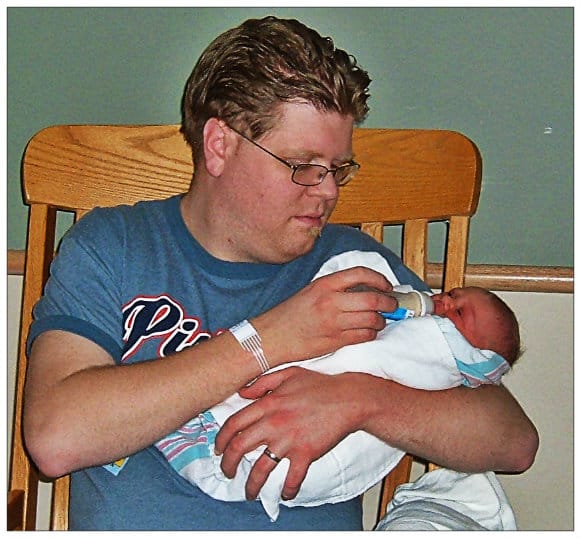 My husband Eric giving Grace her first bottle in the hospital.

When Grace was born I had every intention of exclusively nursing. I could tell something wasn't right even in the hospital, but the only support/advice I was given by the staff was to feed her formula. She wasn't urinating and loosing weight even faster than newborns should. By the time we had her home she was starving. The only advice I was given from LLL and Lactation Consultants was that "Every woman can nurse, if you try hard enough, pump more, drink more water, take more suppliments." Well, I did it all. I pumped, around the clock, I took a handful of supliments every 2 hours, pumped more and more, nursed CONSTANTLY through excruciating pain. By the time Grace was 3 weeks old, I was done nursing all together. It was a sad sad time because I couldn't figure out what was wrong. She latched well, wanted to nurse often, but something wasn't working. I had so many emotions. Feelings of failure (I should have done more), sadness at the loss of that bond we had, jealousy of mothers who could just run out of the house with a diaper and not worry about packing formula, making and washing bottles every night, and the list goes on and on.

When Faithy was born, I knew a little more about what to expect and did a LOT of research. I had suspicions of IGT but it wasn't officially diagnosed. I talked with a lactation consultant very soon after she was born and she led me to realize that it wasn't my fault...I was doing everything right...my body just couldn't produce what it needed to no matter how hard I tried. I felt let down by all of the other advice I'd gotten in the past, and I wanted to go back to those people and tell them my story.
For every mother who decides to breast feed, nursing is a roller coaster. There are good days, and bad days. There are days when it goes smoothly and you couldn't imagine doing anything else, and there are days when you want to throw in the towel and give up completely. But something inside me kept me fighting and I nursed her partially until she was 6 months old! I was so proud of my accomplishment, but it was still a sad day when we said goodbye to that part of our bond.

When Little Man was born, with lots of experience under my belt, the nursing dilemma was much less stressful. I knew what to expect, I did what I could. I enjoyed our time nursing together, and it was all enjoyment and no angst at all. Even though he was on formula by the time he was 1 week old, I knew that it was not my own failure that made it so. I didn't feel guilty (ok, maybe a little) like I did with the girls. I partially nursed him until he was 5 months old!

IGT is such an unknown issue that most women are not even told about it in breastfeeding circles. I would encourage every struggling breastfeeding mom to investigate this. If you're doing everything "by the book" and you still are not producing enough milk for your baby, then you may have IGT too. When I found out about IGT, I felt so free. I was free from the self doubt and guilt. Hopefully there are other moms out there that are having the same struggles will find the freedom I now have.

Here are some links about IGT:

KellyMom is an excellent resource for all things breastfeeding. This article gives lots of excellent suggestions for moms with IGT, and how to determine if you have it or not.

Not Everyone Can Breastfeed

Confessions of a Doctor Mom