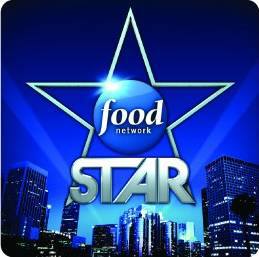 Food Network Star is going to the movies. On this episode the contestants had to make dishes based on a movie theme as well as film a movie trailer that would entice people to order their menu. I am going to take a look at the best recipes from this show which you can print out via Food Network's site as well as comments on some of the failures.

This week's recipes comes probably the two most likable contestants on the show - Nikki and Stacey.

Nikki's Shoot Out Chili | Print the recipe
I am a really big fan of Nikki's POV of meat on the side. I think that this is this season's best show concept. I think people often focus solely on the meat and then serve it up with some nearly forgotten veggies from the freezer or a can that everyone is feel compelled to choke down. Give the vegetables a chance to shine. I like that when she uses meat she makes it count. Like in her Shoot Out Chili. She uses 1 single Andouille sausage as well as bacon fat to saute the veggies. You are still getting enough meat to be satisfied without over indulging which is what is often a problem with meat eating in this country.

What is Andouille Sausage?
This sausage is smoked and made out of pork. It originated in France and is popular in Cajun cooking. It is a hot and spicy sausage, very popular in Louisiana and when making Jambalaya.

In this recipe she uses canned beans - red kidney, black, and white. I would prefer uses dried beans as the ending texture is always better, not that I expected her to use dried in the time that she had on the show. I have been getting into heirloom beans which they have a section dedicated to them at my local Whole Foods Market. Different flavors and textures available would really add to this dish.

Stacey's Campfire S'mores | Print the recipe
What Stacey did with this dessert was a borderline genius. She made a dessert that both fit in with the Western campfire theme as well as having popcorn which is the quintessential movie food. She went all out with the ingredients with the list including smoked sea salt, ancho chile powder, heavy cream, instant espresso, and vanilla bean paste

. I have used vanilla paste in the past to make ice cream. It's a nice option that is better than extract but not as expensive as vanilla beans. I am a big sucker for S'mores theme desserts. One of the best things I ever made was my S'mores Pie with homemade marshmallows on top!

The Bad Recipes
This episode had it's share of bad recipes. Like Lovely's pizza dough donut balls. Pizza dough is a terrible choice for a donut. Way too much gluten. She deserved to be send home on that recipe alone. Chris was trying too hard with his lobster mac & cheese. He used goat cheese and spicy chorzio. I am all for being complicated and adding dimensions of flavors but those dimensions have to work together. If you want a recipe for lobster mac & cheese try Ina Garten's. Damaris was a disappointment when she didn't salt her grits enough. Surprising to see a southern girl serve bland grits. Russell also was missing flavor with his spaghetti western, although I do like the idea of using bison meat, which I think it way better than beef (try bison hot dogs!)

Let me know what you thought of the recipes in this show. Did any of them getting your mouth watering or did they make you lose your appetite?