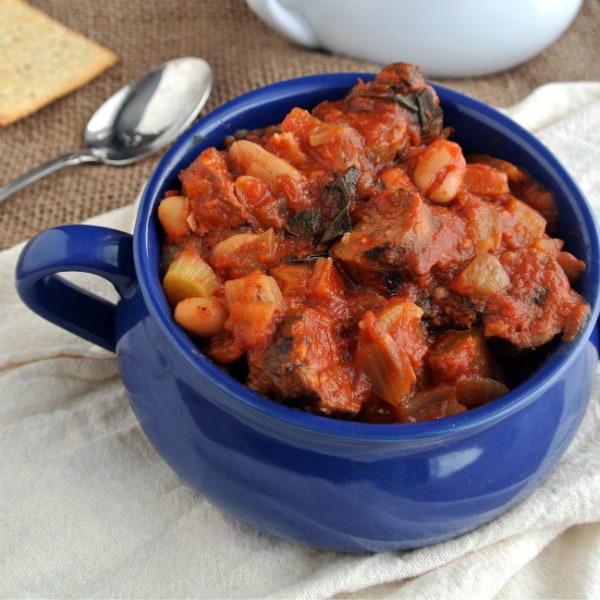 I have been expanding my horizons when it comes to stew. I use to just think of it as some chunks of beef, carrots, and potatoes. Not that there is anything wrong with a good beef stew, but there is a world of options out there that go beyond those 3 ingredients. The last two Christmas Eves we have served a slow cooked pork stew with sausage and pork shoulder. I enjoy the taste of sausage in stew. The texture is really satisfying.

Before every weekend I check to see what new episodes of Food Network shows will be airing and what recipes will be featured. I saw a recipe from Giada for a sausage stew that contains cannellini beans, tomatoes, onion, kale and fennel. Food Network usually posts the recipes before the shows. I like the chance to review the recipes for you my readers before the show airs. I made this stew on Thursday night. Below you will my notes from this recipe including some ways to save money on this recipe. Visit Food Network's website to PRINT the recipe.

SHOPPING FOR  THE INGREDIENTS

1. The recipe calls for turkey or chicken Italian sausage. I got pork because it was on sale, and to save a little money I used 3 sausages instead of 4.

2. A tip of buying the fennel some stores, like Whole Foods Market, will allow you to chop off the top of the fennel. Another way to save a little bit of money.

3. For the kale, I select Lacinato or Dino kale. I think it's easier to chop up since it lays more flat. Depending on the store that price should be the same as the green curly kale, but some stores do charge more for it, so check your prices.

4. Normally I don't recommend buying canned goods. In the winter a good tomato is hard to find. The canned tomatoes taste better. Giada calls for diced tomatoes. I personally do not like chunks of tomatoes, I want something more smooth. I got crushed tomatoes instead.

5. I prefer using dried beans over canned. You get more bang for your buck, you just have to take the time to soak them before hand. Whole Foods was out of dried Cannellini beans, so I had to buy a can for 89 cents. You could use any white bean in this recipe, navy or Great Northern. Cannellini beans have a better flavor and texture. I actually planted dried Cannellini beans last year in my garden.

6. You use either chicken stock or broth. There is a difference as broth is made from the meat, while broth is made from bones that are broken down in water. I pick stock. As the bones break down they release calcium. They also release gelatin which gives the liquid more body.

1. Definitely a cast iron recipe, using both a dutch oven and a grill pan. The dutch oven is great for browning the fennel and onion as it doses out heat evenly and you can stick it in the oven. I use a Lodge Dutch Oven

. Nothing fancy. Gets the job done. A cast iron grill pan

is a wonderful tool to have when the thermometer is too low for grilling outside. Again I turn to Lodge for that as well.

2. In preparing the kale, I remove the center rib, by folding the kale over and running my knife along the rib.

3. Since I used crushed tomatoes, I ended up adding more chicken stock, so that the tomato flavor wasn't too rich. Even thought I had added more liquid the "chunks to liquid ratio" was still perfectly fine.

4. The kale was perfectly cooked in the Dutch oven after 25 minutes.

5. The time on grilling the sausage depends on how thick your sausage is. My sausage was thick was getting perfectly seared on the outside, but not quite done in the middle. When I chopped it up, I decided to throw it into the stew and cook the stew for an additional 5 minutes, which was all it needed to be perfectly cooked.

Very tasty stew, lots of different textures to enjoy. My wife said this is the BEST way I have ever served kale! I did not have any red pepper flakes on hand to add to the stew. It did needed some heat. You have the sweetness of the tomatoes and the fennel and onions sweeten during the opening sauteeing. Use red pepper flakes if you have them, I liked using freshly ground black pepper and a touch of hot paprika. You could also use cayenne. It really needs the spice. This is a dish I would make again whenever I find Italian sausage on sale.