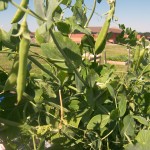 After successfully growing peas (sugar snap) for the first time last year, I am now looking more closely at the exact variety I am purchasing. If you have ever looked in a seed catalog or been to a store that carries a wide selection of seeds, you will notice that there are more than one type of peas, broccoli, or green beans available. In the grocery store you never see green beans labeled blue bush lake.

Last year, with my first attempt I didn’t really care about what seeds I choose, I just wanted to grow peas. But now there are certain things I am looking for. For example, this year I want to have a longer season for peas. So I am going to plant two different varieties, one that is an early variety and one that is later. What does this mean? Well the early varieties produce peas early than the others. So I plant an early variety the same time as a later one, then I should start harvesting from my later varieties a couple weeks after I started my harvest from my early plants.

Below is a list that I have compiled listing what varieties are early and which one are later.

Snap Peas
Most of the snap peas (plump edible pods) arrive at the same time expect the snap Pea Sugar Bon which is a more compact plant, so you harvest earlier (at about 56 days). Some other varieties include: Snap Pea Super Sugar Snap V.P., Snap Pea Super Snappy, Snap Pea Sugar Snap, and Cascadia. You should begin harvesting these varieites anywhere from 64 to 70 days.

Snow Peas
Snow peas have edible pods like snap peas, but they are flat in shape. Again as with snap peas, there are more compact, dwarf plants that will produce an early harvest. These include Snow Pea Snowbird, Pea Dwarf Gray Sugar, and Pea Dwarf White Sugar. Other varities available for a slightly later harvest are Snow Pea Oregon Sugar Pod II, Oregon Giant, and Blizzard. There is also Snow Pea Mammoth Melting Sugar which is an heirloom that takes the longest to be ready for harvest, 68 days, but produces peas that remain stringless and sweet longer than other varieties.