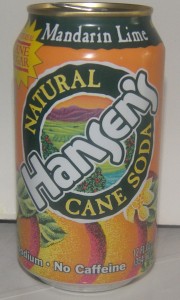 I was watching an episode of the History Channel's Modern Marvels. The episode was on soft drink companies. One of the companies they looked at was Hansen's. During that segment, they showed them producing their Mandarin Lime flavor. I was intrigued by it, so I went out to search for some to have my own taste test. Hansen's sodas are considered natural. The ingredient is pretty basic stuff: carbonated water, pure cane sugar, citric acid, the natural flavors of the Yucatan mandarin and the Colima lime. There are no preservatives, sodium or caffeine.

I have had some of the other Hansen's drinks years ago and was never that impressed. But this flavor I like a lot. The flavor is subtle and texture is bubbly, almost too much carbonation for me. The of orange and lime flavors is unique. I would much rather have those flavors together than lemon and lime like a Sprite or 7UP.

Where to Buy
Trader Joe's
Kroger (I don't know about this exact flavor, but I have seen Hansen's at Kroger before)