Home » At the Store » Fruit & Vegetables » History of Peaches in Georgia

“This article was authored exclusively for Eat Like No One Else by Pearson Farm, a fifth-generation family farm producing the best Georgia peaches that are shipped directly from our orchard to your front door." 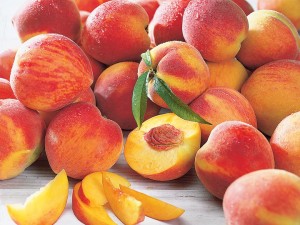 Many people are unfamiliar with the fact that a peach is actually a member of the rose family. Their origination is from China about the time they learned to make bronze. Even the Greeks and Romans talk about the variety of peaches that they enjoyed.

While peaches were originally introduced in the United States in what is now California, they are best known as a leading export of Georgia during the summer months. There are more than three dozen different varieties of peaches produced by Georgia peach farmers each year. The peach season in Georgia typically begins during May and runs through the middle of August. During that time 65,000 tons of peaches are produced. That is enough peaches to fill 1,625 fully-loaded tractor trailers!

During the period of reconstruction in the South, beginning in 1865, peaches were a key crop for Southern farmers. This agricultural endeavor helped many farms thrive and further fuel the taste buds of many people outside the direct growing region. 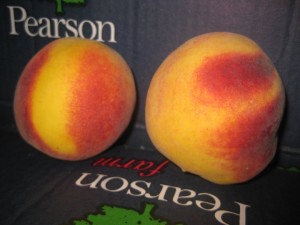 During the mid-nineteenth century, commercialization of Georgia peaches really began. Early peach farming pioneers began shipping peaches in champagne baskets, as opposed to ground charcoal. This served as a preservative and allowed the fresh peaches to be shipped further and further away from Georgia.

As peach farming became a viable entity in Georgia, farmers began to expand their land holdings to grow more peaches. Peach production reached its peak in 1928, when Georgia farmers harvested 360,000 pounds of peaches. These peaches were taken to Savannah, a leading East Coast port town, where they boarded a steam ship headed for New York.

At the turn of the century, before World War I, a new variety of peaches were cultivated. The peaches that were produced on the Rumph Family Farm had a clear seed, yellow flesh and blush on its cheeks. The peaches would become known as the Elberta peach. These peaches could even be shipped without being packed in ice, requiring fewer crates and less overall shipping expense. This variety of peach remained the leading peach export until the middle of the nineteenth century. This peach, despite its previous success, is no longer in commercial production.

As peach production flourished, more and more shipping methods were investigated. People tried to find viable ways to utilize rail transportation to ship peaches across the country without them spoiling or becoming damaged.

The rest is history, as they would say. Peach production has become a major part of the Georgia economy. The peach industry has declined, recently, in the state of Georgia due to the high cost of labor and expense of production. However, the climate and soil in middle Georgia produces a top quality fruit. There is enough cold weather in the winter most years to have a good fruit set and a warm enough spring for fruit development.