Home » At the Store » Beverages » HOTLIPS Soda on FoodCrafters 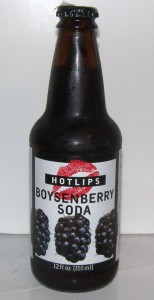 In the age of the television, people have been looking for their 15 minutes of fame. Most of the people are undeserving (just look at all the "famous" reality show stars). But their are a select few who are deserving. Last night a group of those people got their 15 minutes (well actually it was much shorter than 15 minutes). HOTLIPS Soda was featured on an episode of FoodCrafters. FoodCrafters is a new show about independent businesses making unique foods. It is on the brand new Cooking Channel (created by Food Network). The show gave a behind the scenes look into the making of HOTLIPS soda. This carbonated delight is flavored with real fruit, no artificial flavors here. When drinking their soda pop, it's like drinking a farmer's market. In fact that's how they started, somebody brought them a flat of raspberries from a farmer's market and they turned it into HOTLIPS soda. HOTLIPS started as a pizzeria in 1984. It wasn't until 2005 that they got the idea to make their own soda pop. They never expected it to become the hit it has and I imagine after this segment on FoodCrafters, it's only going to become a bigger hit.

What is so unique about their soda is that it may not always be the same. When you drink a Coke, it's the same Coke, each and every time. But with HOTLIPS it all depends on the fruit. The sweetest of a strawberry can vary based on where you get it, what variety it is, and the weather that season. Some might think this inconsistency is a bad thing, but I think it just makes the drink that more intriguiting - it's the excitement of never knowing exactly what you are going to get.

If you are looking to buy some HOTLIPS soda, you can purchase it at their website, or they have a search feature for you to find it in your own area. I found them at the Produce Station in Ann Arbor, Michigan.

Click here to read my review of their boysenberry soda.