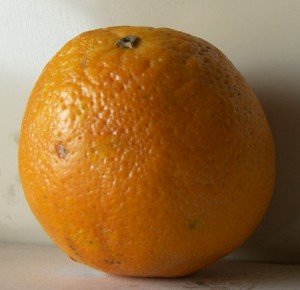 Whenever I think I have run out of citrus to try this year, I get surprised and something else pops up. While do some shopping at the Produce Station in Ann Arbor, MI, I came across Jaffa oranges. I grabbed a sample to take home to try. Jaffa oranges are named after the ancient city of Jaffa, where it was first exported. Israel has enjoyed quite a bit of success in exporting this orange. It has a tough skin, so it transported very well. The majority of Jaffa oranges are exported to European countries. They can be hard to find in the US. Jaffa oranges are also known for being very cold tolerant, allowing them to be grown in slightly colder climates than other types of oranges.

My Experience with this Orange (Rating Scale 1-10)
Seeded or Seedless: Almost seedless (Mine didn't have any, but I hear they could have some)
Sweetness: 6
Acidity : 8
Orange Flavor: 6
Juiciness: 7

Overall Feeling: Not my favorite orange, that is for sure. It has a bit of a bite to it, but was relatively juicy considering it was picked half way around the world. This is a good choice for an out of hand eating orange for those that don't like their oranges overly sweet. Although I read some reports of people saying they liked because they are sweet, I am not sure what they are comparing them to. But when I compare them to the other oranges and mandarins I have had this year, they don't rank that high on the sweetness chart. They seem like they would make good juicing oranges, but I have heard mix reports about the juice becoming bitter over time, similar to Naval oranges. If I get some more I might put that to the test.

Availability: I have only seen them once before and that was at the Produce Station in Ann Arbor, Michigan. They aren't widely available in the US. If anyone else has found them please leave a comment below telling me where you got them from.