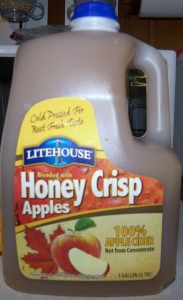 The Honeycrisp apple has become one of the favorite apples each fall. So the idea to market an apple cider containing honeycrisp apples is a great idea. That idea was done by Litehouse. This company makes a wide range of products from dips to cheeses. They also make several varieties of apple cider. I found the cider at Sam's Club. They were giving free samples of it, so of course I tried it and was compelled enough to buy a gallon. Now don't be mislead, this cider isn't 100% honeycrisp apples, it is just 100% cider. Honeycrisp apple juice is the first ingredient listed. The rest of the apples used is a mystery to the consumer. The bottle says the cider has been cold-pressed for the best flavor.

I am used to drinking farm fresh cider, so I am not as big about buying cider from the grocery store. But I admit this is a pretty good cider for store bought. It has a sweet honey like flavor, like you would expect from a cider containing honeycrisp apples. It also has a good geniune apple flavor. It does not taste watered down. This is a nice alternative to farm fresh cider.

Where to Buy
I purchased my gallon sized cider at Sam's Club. You should be able to find them in Sam's Clubs nationwide.