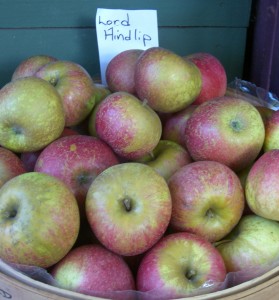 Lord Hindlip may sound like a character from a classic Britsh novel, but it is actually the name of an apple variety. The Lord Hindlip apple was named after a Worcestershire landowner. It first appeared just before the dawn of the 20th century (1896). There isn't any more information on the origin of this apple.

This apple has a reputation for being a long keeper. I have heard that some people say they have had them all the way into May and they were still enjoyable. A lot of people believe the apple improves in flavor over time, so you should store them until at least the New Year. In our culture of having "everything" available to us all year round, the thought of store an apple for months, probably wouldn't occur to us.

Overall Feeling: It is a drier apple, which is common for an old English variety. It has a good flavor, which seemed to get better as I was eating it. Perfectly balance between tart and sweet. I decided to hold one in the fridge to see if I think the flavor improves with age.

« What is and How to Cook Romanesco?
When Are Apples in Season? »