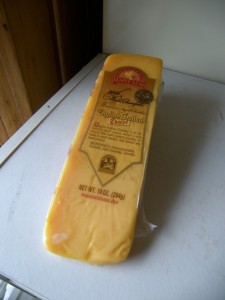 Probably when most people are asked to name a brand of cheese, you will hear words like Kraft, Velveeta, or Laughing Cow rolling off their tongues. If I was asked the same thing one of the brands I would say is Maple Leaf. They are a cheese company out of Monroe, Wisconsin. I have written about some of their other cheeses in the past (cheese curds, Irish Harp cheddar). The latest cheese of theirs is a 2008 World Champion cheddar (it would be fun to judge one of those contests), Maple Leaf English Hollow. This cheddar is made in small batches by hand and has a rind formed around it. It's made in the English style of making cheddar. The name of this cheese was inspired by the area in which Maple Leaf is located. The area was once dominated by English immigrant dairy farmers. It was a specialty featured cheese at my local Mejier store.

I can taste why this became a world champion. It's a cheese with a great texture. It's sharp, but not in a obnoxious way like inferior sharp cheddars. It's only sharp in a pleasant way. This cheese made for an outstanding mac & cheese, one of the best ones that I made using solely cheddar. This cheese could also stand it's own on any cheese board.

« Recap of The Big Waste - How We Waste Food in America (Food Network)
Red, Purple, and White Strawberries (from Burpee) »