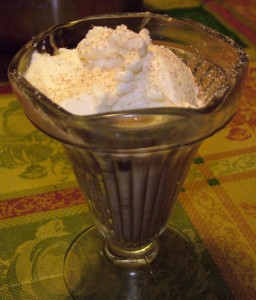 What is it that people love about pumpkin pie? It's the filling of course! So why not take a break from the crust sometimes and just enjoy the filling! While this recipe actually isn't just an pumpkin pie filling, it is a way to enjoy the same pumpkin pie taste without the crust. I discovered this recipe online by Martha Stewart for pumpkin pudding. Below you will find my notes from this recipe. For the full recipe itself, click here to be transported to Martha Stewart's home page.

1. Martha served her pudding inside some mini pumpkins. Although that is a creative idea, I just stuck with regular old bowls.

2. I used my own homemade pumpkin puree that I made with some pie pumpkins that I purchased at the farmer's market. I baked the pumpkin until soft, then remove the meat and pureed it until nice and smooth. It also is a good idea to run the mixture through a strainer so you don't end up with any stringy pieces. That would ruin the texture of the pudding.

3. The only spice that Martha used was cinnamon. That wasn't enough for me, so I added ½ teaspoon of ginger and ¼ teaspoon of nutmeg that I grated myself.

4. At first it looked like the mixture would never thicken. You just need to be patient in time, it will start to come together. I was amazed how thick I was able to get it by waiting and stirring.

5. For a double boiler, I used a medium sized metal mixing bowl inside a pot. You want to use a bowl that fits the pot so that your bowl isn't moving around as you stir.

6. This recipe made enough for my wife, my mom, my dad, my brother, my mother-in-law, and myself to each have a serving. In case you didn't count that is 6 servings.

Overall, this was a nice recipe. It made for a nice thick pudding that tasted like a pumpkin pie. I would make this again.

« FAQ: What is a Self-Basted Turkey?
Soft Ginger Leaf Cookies with Pumpkin Buttercream »