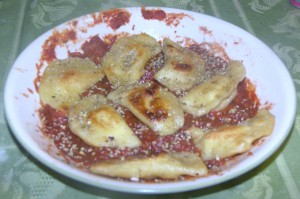 The other night I was planning to make something for dinner and I didn't have all of the ingredients I needed , so I had to thinkg of something else fast. I had meat on hand, but it was in the freezer and I didn't have enough time to defrost it.  I looked at what I had on hand and came up with this recipe for ravioli filled with mozzarella served over tomato sauce.

I began with a dough that I had used in the past to make egg noodles.

Ingredients for the Dough

Instructions for the Dough

Start by mixing together both flours and the salt. In a separate bowl, beat the 2 eggs. Then add the water and oil. Add the liquid to the flour mixture and stir to form a workable dough. Then you need to kneed the dough for 8-10 minutes. The dough should be somewhat elastic. Allow the dough about half an hour to rest before proceeding. When I made the dough, I also made a second batch of it. There is enough sauce in my recipe below for a double batch of ravioli.

Ingredients for the Tomato Sauce

1 28oz can of whole tomatoes (cut and remove the seeds if you wish, but they don't bother me)

1 half of an onion (chopped fine)

In a heavy saucepan add a little bit of canola oil, just enough to cover the bottom of the pan. Then add the carrots, celery, onion, and garlic. Turn onto low. This is called a sweat.  You just want to soften the veggies, not burn them, so keep it low until they have softened. Then, pour the entire can of tomatoes into a heavy saucepan. Add the two heavy pinches of dried oregano and basil.  Bring the mixture to a boil over medium heat, then drop down to low and let the sauce simmer for about 10 minutes. After that it's time to blend the sauce. Using an immersion or stick blender, blend the sauce until it is as smooth as you can get it. If,  at this point, it is still to watery, you can cook it over medium heat until it gets to your desired thickness.

Instructions for Making the Ravioli

Cut the dough in half and place onto a floured surface. Then with a rolling pin, roll the dough to about ⅛ to 1/16 of an inch. Then using a small biscuit cutter, cut out as many circles as you can. Slice up some mozzarella into cubes (use fresh, do not use shredded or it won't be as good).  In order to seal the ravioli you will need to use an egg wash. Beat one egg with a tablespoon of water in a small bowl. With your finger, brush the egg wash around the outside of each circle. Then place the mozzarella off centered on the circle. Then fold over to form a half circle shape. Push on the edges to form a good seal. Repeat until you finished all of  the ravioli.

Instructions for Boiling the Ravioli

In a large pot heat up at least a gallon of water with a heavy pinch of salt (it should taste like salt water). When the water has comes to a boil carefully place one ravioli at a time in the pot. I usually do about 10 ravioli at a time. You know when they are done when they float. Now you could just eat them as is, but you would be losing out on additional flavor. Browning the ravioli in some butter would be a great way to add some more flavor.

Instructions for Browning the Ravioli

In a heavy fry pan, heat up over medium high heat, about 2 tablespoons of butter. Place the ravioli in the pan until they are brown. Make sure to flip and watch the pan carefully so you don't burn them.

Now you can finally bring the finished dish together. Ladle some of the sauce onto a plate or into a bowl and toss in the ravioli and enjoy!