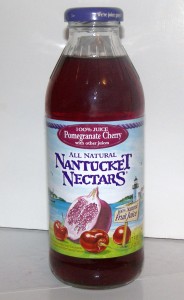 Pomegranate has been all the rage lately in the United States. We are now seeing it included in many juice drinks, including one made by Nantucket Nectars - Pomegranate Cherry. This drink is 100% juice and contains the following juices: apple, cranberry, pomegranate, and cherry. I was surprised to see cranberry included on this list.

This drink just didn't work for me. The flavor was bland, nothing really stood out. It was tart , probably more so than any other Nantucket Nectar I have had. Imagine this juice was a band, and Mr. Pomegranate and Mr. Cherry were part of it. Neither one of them wanted to blair out the other, so both of them played softly. This created a dull and boring band. It seems this drink was like that with the end result being some tart tasting water.