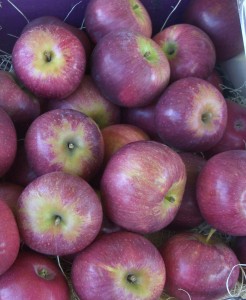 New York 75414-1 sounds more like a taxi cab id than an apple. Yet I found an apple at a store with that exact name. Not the most creative name ever given a piece of fruit. As you imagine this apple was naturally developed in the state of New York (although the ones I bought are Michigan grown). It was developed by the Cornell/Geneva breeding program. The apple has the advantage of being scab-resistant, which is a good thing for the grower as the apple doesn't need to be sprayed against apple scab.

Overall Feeling: One website I read said that this is the kind of apple you either love or hate. Well I was eating the apple the flavor got worse and worse in my mouth until I wanted to spit it out. So don't count me among the lovers of this apple. I also read someone describing it as chalky and I can agree with that. I think this is the worst apple I have had all season long (besides a Red Delicious I had to try while working at an orchard).

« Shenandoah Apples
The Pecan Harvest and the Weather »