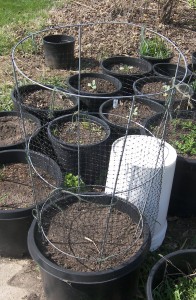 Click here to read all my posts on Mammoth Melting Sugar Snow Peas.

This past Saturday, I planted my second variety of peas that I am growing this year: Burpee's Heirloom Mammoth Melting Sugar Snow Pea (that's a mouthfull). A snow pea is a pea that is flat and the pod is edible. The variety I bought is consider an heirloom. There is a lot of debate out there on what a heirloom is. At the very least it's a variety that has been around for a long time. Typically with heirlooms, you can save the seeds and produce the same plant the next year. Alot of the genetically engineered varieties on the market today, if you tried saving the seeds and planting them again, you would end up disappointed. Either the seeds will be sterile or the plant will under perform it's parent.

Support
There is a reason why these are called "Mammoth", the vines can grow up to 4' tall! I planted mine in a large pot with a large tomatocage wrapped with some netting to give the peas something to climb. Peas are good at taking nitogen from the air, which makes them a good choice for container gardens. Hopefully the height of the container and the netting will help keep out pests. Animals love to chew on your young pea seedlings.

Spacing
When I planted the peas, I put them close together, about an inch apart. Peas don't mind being close together, in fact the competition for space will help the peas grow nice and tall.

Using Soil Inoculant
Before I buried the peas, I sprinkled on some soil inoculant (Burpee calls their Burpee Booster). The inoculant contains bacteria that will help the plants in converting the nitrogen in the air for it's own use. It is not a fertilizer. When I buried the peas, I push them down about an inch or so and covered them with soil.

Expected Harvest
According to the seed package, harvesting comes in 68 days. I planted them on Saturday, April 10th, so counting ahead 68 days, bring us to Thursday, June 17th. So as long as summer doesn't get an early start here I should be in good shape for a nice harvest, here in zone 5.