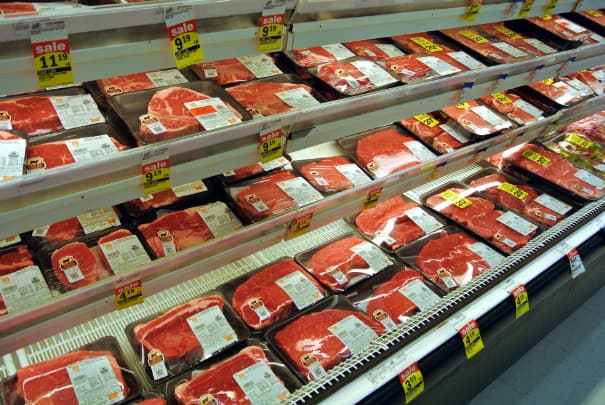 After the recent success on my guide to buying beef at Costco, I decided to expand to other stores. I want people to be informed when it comes to purchasing steaks and roasts. With so many options out there it can be hard to discover what's a deal and where you are overpaying. So I provide this guide to one of the biggest chains in my area - Meijer.

[table]
Beef Type, Price
Flat Cut Brisket, $6.19/lb
This cut requires long cooking time. It's great for smoking or BBQ. It is the top choice for making corn beef. To learn more about brisket check out this post.
Ribeye Steaks, $12.99/lb
One of the most flavorful steaks does cost you a pretty penny. You can save 20 cents a pound if you buy the family pack.
Tenderloin Steaks, $19.99/lb
This is what many people call Filet Mignon. I would recommend buying a whole tenderloin and cut the steaks yourself as you can find whole tenderloins at other stores (Costco or Hiller's for example) for much cheaper per pound
Top Sirloin, $7.99/lb
A great steak for the grill that doesn't cost as much as a Ribeye or T-Bone. I recommend you try cooking them in your oven's broiler.
Flank Steak, $7.69/lb
I love to broil these things. They take a marinade better than any other cut of beef I know.
Top Round Roast or Steak, $5.69/lb (for either)
This cut comes from the upper back part of the cow. It's tougher than the sirloin. It is also lean. Dry cooking methods tend to dry this cut out. I would stick to wet cooking methods with this cut.
Bottom Round Roast, $4.49/lb
Another tough piece of round but one that can be flavorful if you follow my cooking instructions.
Short Ribs, $5.29/lb
Good for stews and BBQ. I haven't worked a lot with them as fatty cuts of beef tend to give me heartburn. This is one of the few cuts I found at Meijer that was cheaper than at Costco.
Eye of Round Roast, $4.69/lb
Makes for a cheap yet still flavorful roast when prepared properly. Take a moment to visit my post on how to cook this cut.
Chuckeye Roast, $4.99/lb
This is my go to cut for pot roast. It has the enough fat and it tasty when you slow cook it. One of my favorite pot roast recipes is my Moroccan Pot Roast.
Chuckeye Steak, $5.19/lb
Basically a chuckeye roast cut into steaks. When treated right these steaks can be grilled to perfection. I have a salt trick for cooking these steaks that works out well.
Chuckeye Center Eye Steak, $5.69/lb
This is the center portion of the chuck eye steak. This is the best of it. The problem with a chuckeye steak is you still end up with some grizzly parts that I usually discard. With the center eye you can eat the whole thing without throwing any out. In the end despite the higher price it might be still a better deal if you are just going to grill it.
Oxtails, $5.89/lb
Not a lot of meat but a lot of beefy flavor. I like to use them to enhances beef broths like the one I used when I made Ina Garten's Rich Beef Barley Soup.
Skirt Steak, $6.19/lb
This is the cut to use when making Mexican dishes like Fajitas.
Ball Tip Steak, $5.69/lb
A cheap steak cut coming from the loin. A popular cut in Michigan. It can be grilled or braised. I would recommend marinating before grilling though.
Beef Shank, $4.29/lb
Just as the oxtails - shanks also works well for broth making. It is a lean cut often used to make lean ground beef. If you are going to eat it braising is your only option as it is too tough for any other cooking method.
Top Loin Steak, $12.99/lb
A boneless cut that comes from the top of the short loin primal. Most places call it a New York Strip steak. Meijer calls it a Top Loin which is more descriptive to what it is. Other people call it a Kansas City Steak or a Strip Loin Steak.
T-Bone Steak, $12.99/lb
A bone-in steak with a bone that looks like a "T". It has a little piece of tenderloin on one side.
Porterhouse Steak, $12.99/lb
If I am going to pay the same price for a T-Bone and a Porterhouse I would go Porterhouse every time. The real difference in the cut is how much tenderloin is there. Porterhouse have a greater deal of the tenderloin on the right side of the bone.
[/table]

I really don't buy a lot of meat at Meijer. Their meat isn't the best quality. Their prices are above those of Costco on every single cut they both had, minus one. They do have sales that will save you money, so if it's a good sale I would buy something there. Otherwise I look elsewhere for my beef.