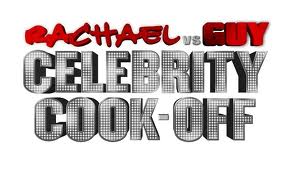 I watched the first season of Rachael vs. Guy. While I felt the format of the show needed to be re-formatted I did appreciate seeing what the celebrities came up with in the way of dishes. I was inspired by one of the episodes to giving Buctani pasta with tomato sauce and basil a try - I have grown to love that pasta. I hope to be inspired once again but just watching what others like to cook.

Each week I will do a breakdown of what I thought of each celebrity's performance. Here is this week's breakdown:

Breakdown of the Celebrities

[table]
Team Rachel
Carnie Wilson, I liked her energy and that she was still able to focus.
Hines Ward, He kind of was just in the background for me in this episode yet his chicken wing dish was beloved by all.
Kathy Najimy, She claimed that she was tasting and seasoning over and over but when the reviews for her mushroom dish came out people were unimpressed.
Gilbert Gottfried, Before the first commercial break I figured he would be the first one out the door. He didn't have a clue about what to cook. As the show continued on I wondered if I was watching Worst Cooks in America instead as he was burning PB&J. By the end of the show it was clear they just brought him on the show for his comedic skills and he really was a waste of a spot.
Although it would have been fun to watch him make more peanut butter sandwiches for weeks, maybe it was for the best he was the first one packing. [/table]

[table]
Team Guy
Dean McDermott, What I liked about him right off the bat was the fact that he knew doing a short rib on a short amount of time was short of smart. He didn't become immediately set in this thinking and being flexible in the kitchen is a huge strength.
Chilli, Guy was worried about her under seasoning but she was too worried about over seasoning. But it ended up being just right.
Cornelia Guest, I appreciate her taking responsibility for not making enough dessert.
Johnny Weir, Not following your leader's advise is a recipe to being send home early in this show. Johnny rejected Guy's idea of not working all the fat out of his chicken meatballs. As expect the meatballs were dry.
[/table]

The Food
I am not going to cover all the dishes just highlight a few items.
1. I liked Dean's idea of the skirt steak paired with the creamy polenta. I have not tried this combo before but this makes me want to try it.
2. Corneila used 3 different types of beans in her chili. I like pairing different versions of the same veggie together, like when cooking multiple colors of carrots together. Time was a factor of course her case so I can forgive her for using canned beans which I never use.
3. Carnie made mac & cheese but in an unique without being obnoxious way. She featured Gruyère in her dish which I like that she didn't just go the cheddar route. I will confess my love of a cheddar mac & cheese sauce all day long but it's fun to mix it up add a little Gouda for that flavor and muenster for a creamy element.