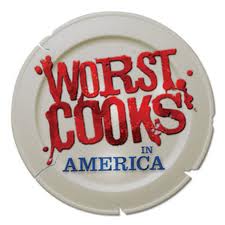 Food Network is chalked full of cooking competitions. A lot of them I have no interest in watching. But one that has always peaked my interest is Worst Cooks in America. One of the goals of this very blog is to teach people to be better cooks, which is what that show is all about. The third season kicked off this past weekend. This time is Anne Burrell versus Bobby Flay. Yes, another show with Bobby. I have never really been a fan of his. So I wouldn't mind seeing Anne go 3 for 3.

It seems this year so far, they are really being rough on the contestant at least from a verbal standpoint. I thought it was over the top. Part of the flaw of this show is teaching people to cook is that you just throw them into the water and hope they don't drown. But this is the boot camp mentality, it's way they call it boot camp. They show them how to do stuff, but I question how much actually teaching is taking place as you see constant struggle with concepts. They don't understand the "why" of cooking.

I will say that I am pleased that they started them out cooking a basic breakfast of bacon, pancakes, and eggs. These are things that people are familiar with, but most of the constants probably don't have a handle on. I wanted to talk a bit about each of those recipes. 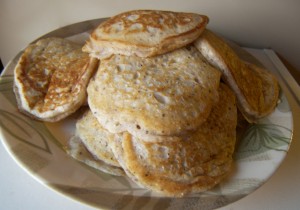 I have actually made these before. I found the recipe on Food Network's website quite a while ago. They are fluffy and the blue cornmeal adds another level of flavor that I really appreciate. I haven't had a chance to try his orange-honey butter or cinnamon maple syrup, but I would like to.

If you are looking for blue cornmeal to try these pancakes, I recommend Bob's Red Mill

. Their cornmeal is always top notch. I always have at least one bag on hand.

Orange Pumpkin Pancakes | Click here for the recipe
This is another nice twist on a pancake. There is so much you can do with pancakes, so why just serve up the same old thing, have some fun. This recipe sounds good to me. I am interested to see the flavor combination of orange and pumpkin, it's not a combo I have done before.

Lessons to Learn from the Episode
Each recap of the show, I will talk about some key lessons that I think are important for people to know that are trying to not to be recommend as a contestant for next season.

1. Understanding flavors - Vanilla and chicken not a good combo. One constant served up some chicken flavored with vanilla extract. I think people try to think outside of the box, but that is hard to do when you don't even understand the box itself. Learn basic, classic flavor combos (like basil and tomato) before going on to trying something more creative.

2. Whipped egg whites = fluffy pancakes - I love the idea of whipped the egg whites and then folding them into the batter. It gives the pancakes great texture. It's especially important when working with a pancake batter that contains "heavy" ingredients like the pumpkin in Anne's recipe. Same thing goes for waffles, like Alton Brown's Sweet Potato Waffles. I would give it a try in any pancake or waffle recipe, even if the recipe doesn't call for it. See how the whipped whites changes the final product.