On this episode of Restaurant Impossible, Robert tackles an English style pub that doesn't really look like one. The Snooty Fox has been around for 29 years. Times were good for the first 26 years, but the last 3 things have gone down hill. That is why Robert is here. 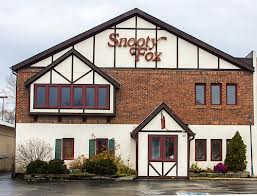 Two major problems have to be address right off the bat. First off, the head chef just quit the day before. I wonder if it had anything to do with Robert coming, although the owner said he seemed unhappy for a while. The second problem a messy kitchen. Now Robert calls this the worst kitchen he has ever seen. He is being over dramatic as he says the same thing every single time he has encountered a dirty kitchen on this show and this one is not the worse by far. Still it did need a good cleaning. This is probably just one detail that has fallen by the wayside during tough times. I know when I am having a tough time, cleaning is usually something that doesn't get do as much as it should.

To address the chef issue, Robert has the owner call up two potential candidates who face off in a 1 hour long cooking contest cooking English pub style food. Naturally one chef choose to make a traditional fish and chips. Robert makes a good point that people think anyone can make fried fish, when in fact it's a challenge to make the batter crisp while the fish inside is moist and flaky without being overcooked. It took me a while to perfect the fried fish recipe that I use.

Beef Pasties | Click here for the recipe
A meat filling surrounded by a puff pastry crust. A popular English dish that is also popular in some areas of the United States like the Upper Peninsula of Michigan.

Chicken Tikka Masala | Click here for the recipe
A dish that doesn't seem like a classic English dish but in fact is popular in England. It is chicken on a stick. The chicken is soaked in a yogurt and spice marinade, then grilled, and served with a creamy spicy sauce. The flavor is similar to a curry.

According to an article in Indianapolis Business Journal, the Snooty Fox did well after the show. But they could not keep up the momentum. The show brought them more guests, but then business just went dead. Owner Tim Queisser made the decision to close the Snooty Fox back in October, ending the restaurant's 29 year run. The Snooty Fox is one of several restaurants were ended being impossible for Robert to fix. Check out my list of the others.

I read a lot of complaints about the service and food after the makeover at websites like Yelp and Urban Spoon. Maybe the decor was the only positive change in the end with this joint and that wasn't enough to save the Snooty Fox. Read the reviews that were given after the show aired the first time in early August 2011.