Home » On TV » Review of Good Eats: The Caul of the Flower

When it comes to cauliflower, I have never given that vegetable much thought. It is the first time it has been mentioned in any way on this website. I am a big fan of some of it's cousins like broccoli and cabbage. But cauliflower has been largely ignored in my household. But that is all about to change, after watching the newest episode of Good Eats, entitled "The Caul of the Flower". In this episode Alton Brown shows three ways to prepare cauliflower. Each is a technique that I never thought of before. 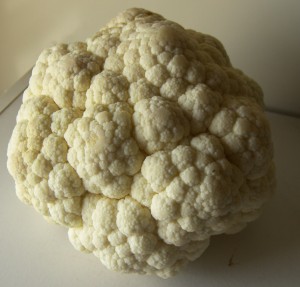 Alton starts off the show with some basic cauliflower facts. It is almost identical to broccoli genetically. The biggest difference is that the flowers in cauliflower form buds, but never actually open up. This is good for the cook, as broccoli that has flowered can be some of the most bitter, nastiest stuff on the planet. Alton then answers a question I have been wondering: why is cauliflower white?. It is because when growing the leaves wrap around the top, covering the buds. Since no sun is able to reach the buds no chylophyll is produced, so there is no color. There are colored cauliflowers, but in those cases, the leaves don't grow over the top.

When buying cauliflower Alton gives some things to look out for. Make sure it has no black or soft spots. If you can, try to smell the cauliflower, you shouldn't seem any sulfur aroma. Also the leaves should not be floppy. To store the cauliflower, wrap it in paper towel or a spare cabbage leaf and then wrap in plastic. Store it in the coldest part of the fridge. 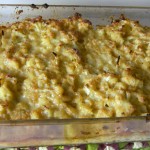 The first recipe Alton shares is for a baked cauliflower dish with cheese. Cauliflower is a perfect vegetable for the oven. Alton microwaves the cauliflower to start. While doing that he prepares the cheese topping, which includes sharp cheddar cheese, homemade bread crumbs (or you could use panko), 1 egg, kosher salt, paprika, mustard powder, black pepper, cayenne pepper, and heavy cream. This mixture is combined with the cauliflower and baked for 20 minutes. Then Alton turns the broiler on to brown the cheese.

Broiled Curried-flower | Click here for the recipe
Right off the bat, you need to know that Alton is not using a curry powder out of a container. He makes his own with mustard seeds, cumin, coriander, orange peel, turmeric, and fenugreek. He crushes these spices up and places them into some heated up canola oil to steep. He cuts the cauliflower into wedge, so each wedge has a piece of stem. They are then broiled in the oven covered for about 6 minutes with some water. Then the oil/spice mixture and some kosher salt is put it one side, and broiled until that side has browned, then he repeats it with the 2nd side. I really like this technique and am looking forward to trying it myself.

Cauliflower Slaw | Click here for recipe
This recipe is a way to eat raw cauliflower without the need for a pile of ranch dressing to choke it down. He shreds the cauliflower in his food processor and then combines it with pine nuts, kosher salt, lime juice, olive oil, parsley, mint, chopped tomatoes, golden raisins, and black pepper. If you are the kind of person that brings a raw vegetable platter to a picnic or potluck, try this recipe instead.