I have been working at an apple orchard this fall. One of the benefits of this job is that I have access to picking any fruit that I want to that has already fallen off the tree. One day after picking some Stanley Plums, I went back and picked 1 peck off the ground. I wanted to find some use for them that went beyond what everyone thinks of (such as jam). So I did some searching and found a recipe for Bobby Flay recipe for Spicy Plum Chicken Thighs. I made a few changes to the recipe and gave it a try. I was very happy the way it turned out. It had a BBQ sauce type flavor, but it a plum kind of way. I had a lot of leftover sauce. I decided that this sauce might be good on pork tenderloin. And I was right. Below you will find out how I did it. 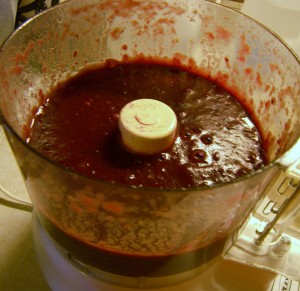 In a large saucepan, add some olive oil, then your onion and garlic. They need to be chopped before adding. Cook them until they are soft. Then add the remaining ingredients. Continue cooking until the plums have soften. Then place mixture into a food processor

and mix until the mixture is smooth. Your sauce is then ready to go. You will have more sauce then you need for one pork tenderloin, so you will be able to freeze the leftover.

To make the Pork Tenderloin
I like to brine my pork. It makes the pork, juicy and flavorful throughout. I like to give the pork a soak in some vegetable broth, some kosher salt, and brown sugar for at least a couple hours. Or you can simply just combine some water, salt, and sugar. Just make sure your brine is cool before adding to the pork and only brine it inside the fridge.

I like to sear my tenderloin before putting it in the oven to finish. I bring a cast iron grill pan

to medium high heat. Then start the tenderloin at the top of the pan and as each side brown, roll it down towards the bottom of the pan. When finished remove from the pan and place in a baking dish big enough to fit your tenderloin.

to wipe my sauce onto the tenderloin. I pour a bit of the sauce into a separate bowl first, as I don't want to contaminate the entire batch. I then place a probe thermometer

into the center of the pork and place into a 400 degree oven. The recommend internal temperature for pork is 145 degrees. There will still be a little pink right in the middle and if that is a turn off to you, then go up to 160. How long it will take depends on the size your tenderloin and how well your oven maintains it's temperature. That is why it's best to trust in the thermometer.

I brush some more sauce onto the tenderloin when I remove it from the oven. Then I let it rest for 10 minutes before carving.

« Adam's Pearmain Apples
Why are Honeycrisp Apples So Expensive? »