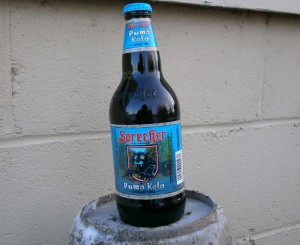 When you think about cola, you are use to it being spelled with a "C". However the "K" is really the appropriate later as the tree the extract used to make colas comes from begins with a "K". Sprecher spells their cola with a K. They make their Puma Kola in a gas-fried kettle, which they say imparts a distinctive flavor. The drink is flavored using kola extract, real vanilla, a little bit of cinnamon, and raw Wisconsin honey. The drink comes in a 16 oz glass bottle than can be purchased individually or in a 4 pack.

I got a 4-pack of this stuff for Christmas. I have had most of the Sprecher family, just somehow keep missing out on the Puma Kola.

The best Kola (or Cola) I have had. This is everything that a Kola should be. It tastes better than Coke, it's carbonated better than Coke, it's just better than the most popular soft drink on earth. The cola flavor is just outstanding. It's complex. And the best part is you don't feel like bubbles are burning your tongue like with Coke. I am sure some avid Coke or Pepsi fans would either love this or hate it. It's different enough to produce one of those two emotions.