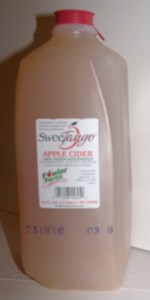 This is part of a series of posts on juices and unique drinks that I have come across. Everyone knows the Pepsis and Cokes of this world and many sites cover the wines and beers, but I am bringing to you the rest of the beverage world

Last fall I read an article online about the SweeTango apple. It is a new apple developed at the University of Minnesota. SweeTango is a cross between a Honeycrisp (also developed at Minnesota) and a Zestar. The apple was released last fall to a limited audience. I never say any in my area (Michigan). However I was at Joe's Produce in Livonia last week, I came across an apple cider that was made from just SweeTango apples. I was shocked to find this cider when I haven't even seen the apple yet. So of course I had to buy me a half gallon. This cider was distributed by Fowler Farms out of Wolcott, New York. I have also had their Honeycrisp cider (which was good) and they have a Fuji Apple Cider.

Wow! This was a unique apple cider, unique in a very good way. Your taste buds are greeted by a sweetness as the liquid flows down your throat, you get a taste that has spice to it. You would swear that their is spices added to this cider, but that is not the case. If the apple is as good as this cider, I am looking for to taking a bite of one in the future. This is some of the best cider I have ever had and I never expected to be saying that in the middle of winter!