Home » At the Store » Fruit & Vegetables » The Red Prince Apple 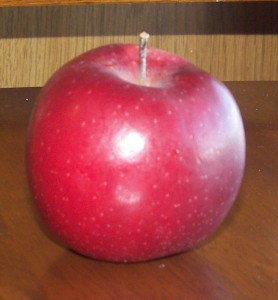 It seems like this winter, every time I go to the grocery store I am come upon another new apple variety to try. Apples like the Jazz, Pinata, and Sonya. Next up for my taste buds is the Red Prince. I bought them in a bag after trying a sample at Whole Foods Market in Ann Arbor, Michigan. The bag indicated that these apples were grown by our neighbors of the north - Canada. The Red Prince is both juicy and tart. I personally did not think the apple had all that much flavor, thought it was rather bland. I put one apple in the fridge to see if that would make it better, like it did with the Pinata, but no luck this time. I think the apple would still work well in baking, as it doesn't turn to mush quickly. I tried some when I made fried apples yesterday and they came out good. The apple's bland taste was a nice canvas for brown sugar, cinnamon, cloves, and nutmeg. So if your going to buy this apple, I would do so for baking purposes, not out of hand eating. But as always with fruit, the quality can vary from farm to farm and time to time, so don't trust my word here as gold.

The Red Prince was first discovered in 1994 along the German/Dutch border. This variety developed naturally when a Golden Delicious crossed with a Jonathan. The apple made it to Ontario, Canada in 2001.