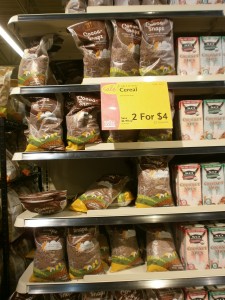 Even if you don't want to admit it, we all have those childhood sweet cereals that we still love. We may not buy them all the time because we are too embarrassed but we would glad eat a bowl if we were offered. For some people Cocoa Pebbles may be one of those cereals. Fred Flintstone's face is keep alive in grocery aisles across the country. But I have found a cereal that is better than those chocolate flavored stone age treats. I have discussed Three Sisters on this blog before, but to give you a refresher, they are a company that makes cereals with renewable energy sources, that are similar to popular national brands. Their cereal contain all natural ingredients (no trans fat, partially hydrogenated oil, or fake flavors). They also only use bags, so you aren't wasting cardboard (or paying for it either).

They recently came out with Cocoa Snapz. They have the same crunch that Cocoa Pebbles do, but the cocoa flavor is even better! I tasted both of them side by side, and the Three Sisters version was clearly much more flavorful. I would get them again. Cocoa cereal has now come out of the stone age!

Where to Buy
Three Sisters cereal can be found at Whole Foods stores across the country. They go on sale quite often, so if you stock up when they are, you are getting a good deal. They were 2 for $4.00 last time I visited. Each bag contains 12 ounces.