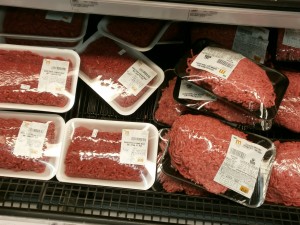 Last week reports began surfacing about the USDA ordering 7 million pounds of pink slime to be used in school lunches. Pink slime is made up of leftover beef scraps that are treated with ammonia to "ensure" it's safe to eat. It's meant to be used as a filler to put more money into the producer's pockets as well as to save the consumer some money. It's not quality beef at all, and there is a lot of debate raging about whether the ammonia is safe or not (check out the comments on my What is Pink Slime & How to Avoid It page or this 2009 NY Times article).

**UPDATE** I learned on the March 15th edition of ABC Good Morning America that the schools will now be given a choice. They can either order the ground beef with pink slime or without. When given the option they are told that the pink slime beef is leaner, which is true. I wonder if schools under pressure from concerns of kids being too obese will opt for the pink slime because of that. I will address what I think the real problem that needs to be addressed a little later in the post.

I also just read a report from January, about the USDA deciding to ban whole milk from school. There is a lot of concern about obesity among kids. So one of the ways the USDA addresses this concern by taking out whole milk.

Is Whole Milk Really Worse for You Than 2% or Skim
Is banning whole milk really going to benefit the kids? It seems to make sense that eating less fat would make you less fat. I read an article speaking of the benefits of whole milk, that in fact it isn't worse for you but actually a better option. According to the article the vitamins in the milk are fat soluble. We need the fat for our bodies to be able to absorb them. So even if you fortify skim milk, you still won't be able to absorb the vitamins for all their worth. I don't think we are doing our kids any favors by banning whole milk. I give whole milk to my kids and have no reservations about doing so. I am not worried it's going to led them to becoming overweight.

Our government is fine with feeding our kids pink slime but think getting rid of whole milk will benefit them. Does that make any sense to you? But let's put the debate aside for a second, and look at what I think the real underlying problem is.

What the Real Problem Is
We can sit back and debate these issues all day, but I think the real problem is not what our government is doing right or wrong. They are just reacting to a bigger problem, a problem that starts in the home. It's not like kids are eating for the first time when they enter school. They have spent years being feed the food their parents have selected for them. If we give our kids bad choices to start with, then they will keep making those bad choices, and no amount of "government help" will correct the issue. Of course the schools want to feed kids food they will actually eat, which is how all the fried chicken nuggets, french fries, chocolate milk, and other not so healthy options entered the schools in the first place.

What I am concerned is going to happen is, even if the government is able to make lunches healthier, that the kids aren't going to eat it. Instead parents will pick up their kids and they will complain about how hungry they are. Wanting to stop the kids from crying, they will head to the Golden Arches of McDonald's to fill their kid's stomachs, completely undermining what the government was trying to accomplish. This will train the kids to only eat at school when they like at something because they know mom or dad will be waiting to provide them their heart's desire.

One of the reasons I began this website was to teach people how to eat like no one else. How to skip the processed foods and go back to eating whole, healthy food made from scratch. We live in a nation where most people seem to be lacking the skills to accomplish this. Just for example, a lot of people are shocked that I have made my own crackers before. No one thinks crackers are something you make in your home kitchen. If the government wants to make a real impact on this situation, they can start offering opportunities in schools for kids to learn these skills and it needs to go beyond a food pyramid or whatever model they are using now. Until we have a paradigm shift in how we view food (growing it, choosing it, preparing it) then we will be just spinning our wheels.