Home » Fruit Reviews » Apples » What is a SweeTango Apple Like? 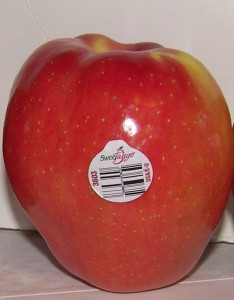 All the talk this year regarding apples have been around the new SweeTango variety. It is a cross between a Zestar! and the popular Honeycrisp. It was developed at the University of Minnesota. It is grown by a cooperative of growers, called the Next Big Thing. This includes 45 members at this time, one of them being Stemilt Growers. The SweeTango apples I got to try were grown by Stemilt.

It was first released commercially last year, but only in small quantities. This year there will be more available, but you still have to act fast. As the trees grow and mature, SweeTango will become easier to find. Click here for a list of places that I have confirmed will have SweeTango. This apple is harvested in late August and early September, making it one of the first quality apples of the season.

The first thing you might notice about this apple is that is looks alot like a Honeycrisp. It is the same red color with a yellow breaking background. You will also notice the size of the apple. Young trees tend to produce large apples, as time goes on the tree will produce more, but smaller apples.

Overall Feeling: Before I took my first bite, I took some time to smell the apple. This apple is said to have hints of fall spices in it. When I smelled the bottom of the apple, it smelled like some kind of spice, almost like cinnamon or ginger. So then I sliced up the apple and watched the juice run down my knife. And finally the first taste, wow that's one crisp apple. It for sure has the crispiness that the Honeycrisp is known for. Taste wise it has a nice balance of sweet and tart notes with a solid apple flavor. Now as for those fall spices, you could taste them as you shallow the apple.

Looking for SweeTango? Check out my page on where to find them.
Click here for everything apple related on my site.