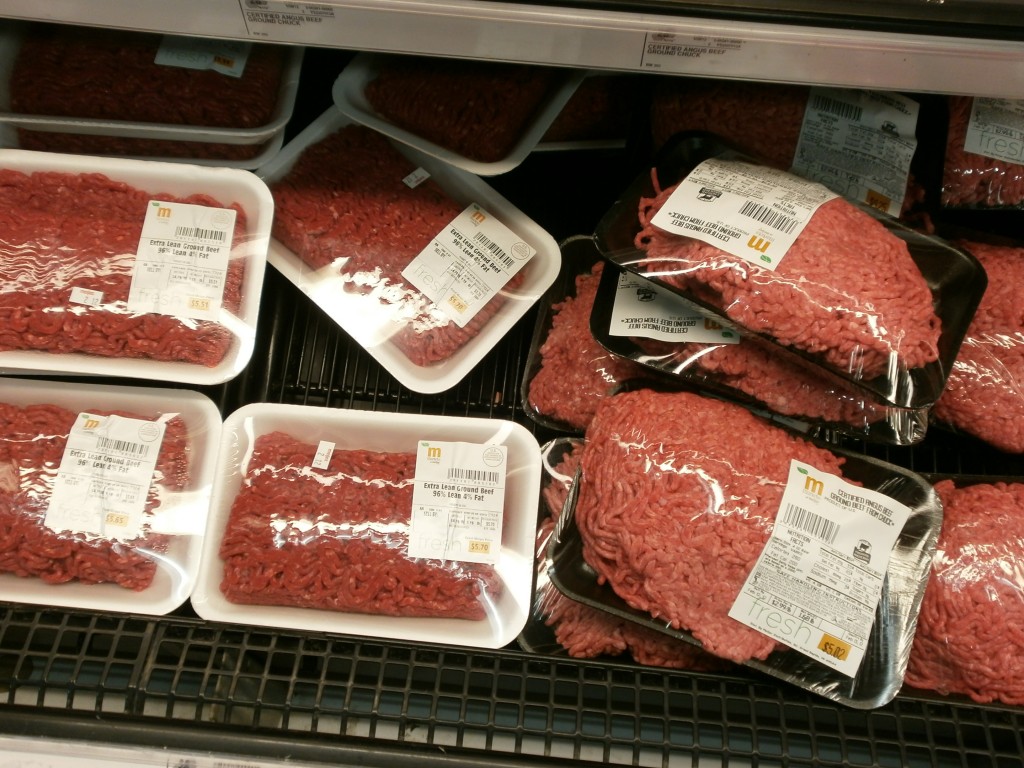 Two summers ago I was watching the season premiere of Jamie Oliver's Food Revolution. One of the points in this episode was to learn where your food comes from. This led him to the topic of pink slime. What is pink slime (some people call it red slime)? Whenever a cow is butchered there are pieces that are cut off that aren't considered for human consumption. There is a greater risk for E. coli and other nasty stuff in those parts of the cow. It use to be mainly just for pet food. A dog's stomach can handle the kind of stuff ours can't. However now this pink slime is ending up in our foods. Using a centrifuge they can separate the fat from the meat. Once they salvage this meat, there still is the concern of potential illness in humans. So to make sure that won't be a problem, they pull out a chemical - ammonia. Yes, the meat industry actually uses ammonia to kill anything that might be in the meat and the United States Department of Agriculture is perfect ok with this. In fact, they are so ok with it that no one has to list on their labels that ammonia was ever used. The meat industry convinced the USDA, that the ammonia is just a "processing agent". There is some limits put on pink slime. You can't use more than 15% of it in ground beef. So it's basically just used as a filler, but the filler saves the meat industry some serious dough. It has put a lot of dough in the pockets of Beef Products Inc, the creators of pink slime. They call the product "Boneless Lean Beef Trimmings (BLBT)" or "Finely Textured Beef (FTB)".

Ammonia is something that is found naturally in the environment. We have it our bodies. What I am concerned about is putting more ammonia into your body than you can handle. Is pink slime doing this? That I don't know. I haven't read any research that proves this. But it's risk I do not want to take and it's a risk that I can avoid. I believe the way we have treated and processed food in this country has lead to a lot of problems. People having problems with things like gluten and other allergies seem to be a more recent trend. People I have talked to in my generation and my parent's don't remember these things being such a problem.

Let's go back to why they use ammonia in the first place - to kill any E. coli bacteria. This is one of those fixing the problem we caused situations. E. coli is as natural as ammonia. We have it in our bodies right now. It became a problem when people started feeding corn to cows. This caused a mutation to occur with the E. coli bacteria in the cow, which lead to a strain that is harmful to us. Biologists from the USDA and Cornell University have known about this since 1998. You can learn more about this topic from food documentaries like Food Inc.

How Can You Avoid Pink Slime?
So how do you avoid this kind of beef? Good news is that McDonald's, Burger King, and Taco Bell have all stopped using pink slime (which means they were using it in the first place). But that doesn't mean all fast food places stopped using it. You may also encounter it at the grocery store. You should never ever buy ground beef labeled as hamburger. That is almost a guarantee that you will be getting some grounded up pink slime in there. Recently, I have read reports about the USDA purchasing 7 million pounds of pink slime for school lunches.

How Can You Tell if You are Getting Pink Slime?
According to an ABC news report, 70% of super market beef contains pink slime. Doesn't that make you sick. You really can't tell when you are getting it, but you can tell when you are not getting it. Companies aren't required to say they used pink slime in a product. So the only way to read that something 100% from whatever part of the cow (100% ground chuck or ground sirloin for example). If it does not have this 100% label or you are still having doubts, then only way to know for sure that you are pink slime free is to have a butcher grind the meat right in front of you. There are places they will do this. Next time you are at your local grocery store, grab a roast (such as a boneless chuck eye roast) and ask someone behind the butcher counter if they can grind it for you. Any grocery store interested in giving good customer service should do this for you.

What Groceries Do Not Use Pink Slime?
ABC News did a follow-up report, asking some grocery stores if they use pink slime. According to that report, these stores claimed they do not use pink slime:

Now just because these stores don't add it to their fresh ground beef, it doesn't mean you won't find it as a filler in some form in the frozen products that contain beef. There is no way to tell on the packaging if the product contains pink slime or not. I personally do not buy nor do I recommend buying any type of frozen beef product.

For more information on pink slime in frozen beef, check out my new post on the topic.

Safeway does not make the list above as they confirm the use of " Lean Finely Textured Ground Beef". They think say if the government says it safe, then it's safe for Safeway. But they did say they are reviewing the manner, so we will see. **UPDATE** As of 3/21/2012, Safeway has decided to remove pink slime from their freshly ground beef.

Update from 1/29/2013: ABC Being Sued by Beef Products Inc (BPI)
Beef Products Inc has filed a lawsuit against ABC for defamation in their use of the term pink slime. BPI has lost millions of dollars in revenue ever since many restaurants and groceries stop using their product. Jamie Oliver is also being sued in this case, which as of 1/29/2013 was headed to federal court in Omaha.

Does Organic Ground Beef Contain Pink Slime?
If the ground beef is labeled certified USDA organic, than it cannot contain any fillers, so it will not have pink slime in it.

Is Pink Slime Found in Ground Turkey, Pork, or Chicken?
Pink slime is a beef product that is only used in other beef products. They don't put it in ground turkey, chicken, or pork.

Want to know for sure you aren't getting pink slime - grind the meat yourself. You can get a hand powered meat grinder

or if you have a KitchenAid Stand Mixer

you can buy an meat grinder attachment

It's important to know what is really in your food. Don't take it for granted. And when in doubt, grind it yourself or with the help of your neighborhood butcher. I especially would avoid ground poultry that comes already packaged, particularly in light of a big recall last year. Find a store that grounds it's own poultry in their store daily.

Should You Be Concerned About Arsenic in Apple Juice? A post inspired by an episode of Dr. Oz questioning the levels of arsenic in apple juice supplies.

Coke Finds Fungicide in Orange Juice; U.S. Halts Imports. Early this year fungicides were discovered in orange juice imported from Brazil. Much of America's orange juice supply contains juice from other countries (except for these brands).