Normally I don't comment a lot on fast food, but in this case I have a chance to put my "Eat Like No One Else" spin on things. Yesterday it was announced that Taco Bell was pulling an advertisement for their 12 pack taco ad, due to numerous complaints. What were those complaints? That Taco Bell was bashing veggies. The guy doing the voice over for the ad said that bringing a veggie tray to a party is "like punting on fourth and one". Being someone who is all about eating your veggies and who practices what he preaches would be all in agreement with why they pulled the ad. Actually I agree with the ad - to some extent.

I feel most people's mindset when bringing a veggie tray to a party is to make sure they were are eating our vegetables - which is good. But the way it is done is not really as healthy as you make at first think. I really don't think people love eating the raw vegetables, but what they do love is the dip most of the time - it's ranch. Full of fat. People are ok to choke down the vegetables because they can dip in in mounds of delicious fat (although I personally find ranch dressing to be anything but delicious). Those trays can cost a pretty penny too. Is there a better way? I think if you are really serious about having vegetables at your party you need to give them more time than just picking out a tray that some grocery store put together for you. 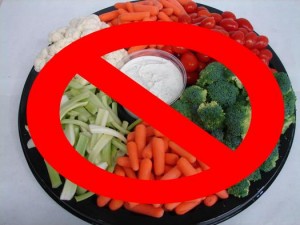 Alton Brown on an episode of Good Eats came up with a better way - a Fresh Broccoli Salad. He takes the broccoli and slices it thin using a mandolin

. He then dressed it up with a tangy vinaigrette featuring white wine vinegar, lemon juice, Dijon mustard, olive oil, and salt & pepper. This sounds like a much better way to eat broccoli then dumping in ranch. Learn more about how to make this dish by watching this YouTube video.

Another good way to serve veggies as a party as if you can get your hands on some freshly picked sugar snap or snow peas. Just place them in some boiling water for 1 to 2 minutes to blanch them, then dump them into a ice water bath to stop the cooking. This will just soften them up enough without taking away most of the nutrition. If you get garden fresh ones - they are sweet like candy. Your guests won't need to dip them in anything (although you could do another vinaigrette if you like).

While I don't think Taco Bell was out to "diss veggies", they certainly had a right to make fun of the standard vegetable platter. I hope after reading this you will re-think bringing one to your next party and do what Taco Bell does "think outside the (in this case) tray..."