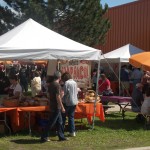 If you were traveling down Ellsworth St. in Ann Arbor, Michigan today you may have smelled something funny in the area - BACON! Now that might be strange in any other town in American, but Ann Arbor, Michigan isn't any other town, it is the home of Zingerman's, the good food people. This weekend was their camp bacon event that included a free street party with free samples galore (boy was I thirsty afterward), from several kinds of bacon to ham to baked goods with bacon in them. The bacon vendors there were from different regions of the country, some came from as far away as Arkansas. 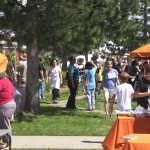 The street fair also had goods for sale from Zingerman's Bakehouse and Creamery. You also had the opportunity to buy a copy of Ari Weinzweig's book on bacon, a bacon camp t-shirt, a pig magnet listing some of the best bacons in America and where to get them, and more. The event was meant to be a fundraiser for the local 4-H. They had potential future bacon there too (two pigs).

Earlier in the day there was their Camp Bacon main event that included a journey through the history of bacon, tastings, breakfast and lunch and more. That event ran from 9am-3pm, and cost $150. To learn more about the event and other bacon related information, visit their camp bacon website.