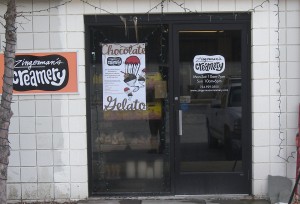 This afternoon, I got a chance to attend Zingerman's Creamery Gelato Kickoff. It was their way of welcoming the summer season with their new summer flavors. They were offering free scoops of gelato to anyone in the shop. My wife tried the dark chocolate, my daughter had the blueberry sorbet, and I had the Luciano's Lemon, which had a nice lemon flavor without being too tart, very good. They were also sampling their brand new Maple Bacon gelato, which I have to say is the strangest flavor I have ever seen. Never did I think, hey you know what this gelato needs, some pieces of bacon, but it turned out much better than I thought it would. The maple flavor of the gelato itself was excellent. As for the bacon it was different because it was candy-coated and didn't have the crispiness you expect in bacon. My wife thought it was too chewy for her liking. Zingerman's is having an event called Camp Bacon, which is what inspired this gelato flavor.

Overall it was a nice way to break up the day and cool off on a muggy June day. Thanks Zingerman's for putting on this free event and keep churning out quality products.