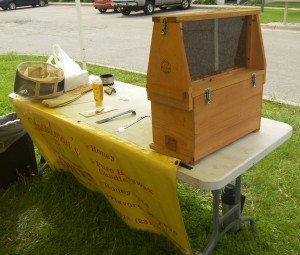 One of the great things about living in the Ann Arbor area is Zingerman's. They are known across this country for their focus on quality, good food. They like to search out the best possible ingredients when it comes to making their food. So whenever Zingerman's chooses to use someone's product, you know it must be the top of the line. This past Saturday, Zingerman's hosted Hasselman's honey outside their south Ann Arbor location. This is the honey that they use in their delicious honey gelato. I got an opportunity to chat with the beekeeper Larry Hasselman of Fremont, Michigan. He brought along some of his bees, his equipment, and of course - the honey! He gave the public a peak into the life of a beekeeper.

Larry began his career in honey with a causal comment. He mentioned to his family that it would be neat to have a beehive. His words were taken to heart and that Christmas, he receive all the equipment he needed along with a promise of his bees arriving that spring. Some 35 years later, Larry is still at it. He is focused on bringing the best quality honey you can buy. He only heats his honey to 120 degrees so not to damage it's flavor as well as the nutrients within. Most honey you buy in the grocery store has been heated to temperatures quite a bit higher. This makes a more shelf stable honey that will be very slow to crystallize (if ever) but it also destroys the nutrients and the flavor, so all you have left is sweetness without any depth. If that is the only honey you have known you will be pleasantly surprised with Larry's honey. It has a mild, delicious multi-dimensional flavor. Larry's bees gather their honey from several sources. Basswood is the primary source, but the bees also visit white Dutch clover, alfalfa, and some wildflowers. This combination of plants gives Hasselman's honey a unique flavor that you won't be able to find exactly replicated elsewhere. Honey is much like wine. It's changes based on where it is made.

Hasselman's Pure Michigan Honey became the choice for Zingerman's Creamery after they discovered them at a food show in Grand Rapids. You can even buy the honey in the creamery. The honey is also available in a few select grocery stores as well as several farmer's market in the southwest part of Michigan.