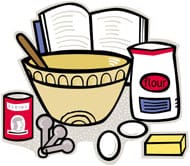 Question: Do You Have to Worry About GMOs in Baking Powder?

Answer: More and more people are start to learning about the GMO issue. How growing amounts of the food we eat contain ingredients that are genetically modified organisms. There is major concern that these GMO foods are and will cause major health problems. Europe won't even allow them because they are so concerned. But here in America we find they are showing up everywhere. In order to avoid them you have to be very careful what you eat and the ingredients you use. Today I want to talk about one ingredient you find in most households that do any kind of baking - baking powder. First we need to know what is in baking powder.

Generally speaking baking powder is a combination of sodium bicarbonate (baking soda), a starch, and an acidic component. The starch most commonly used in baking powder is corn starch. This is where you run the risk of having a GMO ingredient. According to the Non-GMO Project about 88% of the U.S. corn crop in 2011 was genetically modified. It's a really good chance that if you are using a baking powder that has corn starch in it's ingredients that you are adding GMOs to your baking goods. Unless the container says otherwise I would automatically assume that the baking powder contains GM corn starch.

What Baking Powder is Non-GMO

So what options do you have? I have been doing a little research into non-GMO baking powders and I found one national brand that has non-GMO written on their label - Rumford Baking Powder. It is also an aluminum free baking powder. So baking powders use sodium aluminum sulfate. The aluminum can give baked goods a slightly bitter taste, which you don't want. There is also concerns (meaning not confirmed) about possible health issues such as Alzheimer's from too much aluminum.

The same company that makes Rumford Baking Powder also makes Clabber Girl, another popular brand. However this brand does NOT say non-GMO on the label and it does contain aluminum, so don't think your safe because you are buying from the same company with just a different name on the product.

Make Your Own Baking Powder
You can make your very own baking powder. However homemade versions are only single acting. That means once the baking powder hits comes in touch with liquid it begins to do it's thing. So you must get your baked good in the oven immediately. Store bought baking powder is typically double acting. So there is that first leavening when the liquid is added and then a second leavening occurs when heat is introduced. Most of us aren't going to have access to what we need to make a double acting. But a single acting can be made by combining cream of tartar, baking soda, and a starch. For a starch you can use potato or arrowroot to avoid having to hunt down a non-GMO corn starch.

So as you can see if you are opting for a non-GMO lifestyle you are going to have to watch careful what baking powders you use. Making your own single acting powder or buying Rumford's non-GMO double acting powder are the best options that I know of.