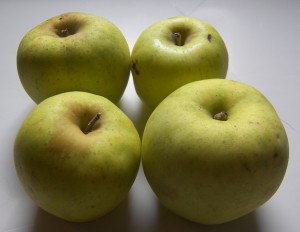 The story of Johnny Appleseed is often included with many tall tales of our country's frontier days. But unlike some of those fables, Johnny Appleseed was a real person. His real name was John Chapman. One of the seeds he planted was believed to have been Grimes Golden. This variety was first found in West Virginia in the 1800s. It is named after it's "founder" Thomas Grimes. This apple's biggest claim to fame is that it's believe to be one of the parents of one of the most popular apples in today's market - the Golden Delicious. They look very similar, one could easily mistaken them for each other.

As for uses for Grimes Golden is one of the most multi purpose apples. It's great just slicing up and eating. It also holds it's own when baked and it can be good for making applesauce with. In both causes less sugar is needed and you might want to combine them with some apples that are more on the tart side to get that much sought after sweet/tart balance. The apple is also popular in cider making.