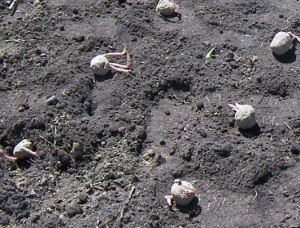 Introduction
When looking to grow potatoes for the first time this year, I was looking for a variety that had a good reputation. Red Pontiac

are a popular red skinned potatoe that are said to be amongst the easiest of the potatoes to grow. They have a white interior. They were also the cheapest seed potatoes I found. So I went with more of them than the other two varieties I am growing this year.

When to Plant
You can plant these once the danger of heavy frost is over. You don't want the ground to freeze up again after planting. But potatoes can handle a light frost. Plus you want to plant them as early as you can because as the season goes on the chance of disease increases.

Early, Mid, or Late Variety?
Potatoes are categorized as either early, mid, or late season types. This indicates how long they take to grow and when in the season they will be ready. I choose one of each variety. Red Pontiac potatoes are a mid-season variety.

Starting Seed Potatoes
I bought my Red Pontiac potatoes from a local garden store. Never use potatoes you buy from the grocery store. They have not be tested for diseases and often they have been sprayed to slow growth of eyes. Look for potatoes that are around the size of a chicken egg. Bigger ones can be cut in half. Store the potatoes in a cool, dry place until you are ready to plant.

Expected Harvest
I planted my potatoes in early May. I got a delayed start because we got a lot of rain this spring and I need to expand my garden to make room for them. I expect the harvest to come in about 75-80 days, so sometime in late July.