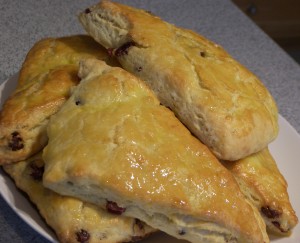 I have never had a scone before. They never really sounded that appealing. Most scones I have seen looked more like stones than a baked treat. However my daughter and a couple of her playmates were having a princess tea party. Scones seemed like a good choice for the party. I searched through tons of recipes, and decided on one by Ina Garten, otherwise known as the Barefoot Contessa. I will outline below my experience with this recipe. If you wish to view the entire recipe, click here for Food Network's website.

1. I had every ingredient I needed with the exception of heavy cream. So I had to go with whole milk instead.

2. Do NOT, repeat DO NOT overwork the dough! You don't want to end up with stones instead of scones. You mix the dough to much you will great gluten. Gluten is great for yeast breads, not for scones. So only mix to just incorporate the ingredients.

3. This recipe calls for the dough to be made in a stand mixer. If you do not have one, then you can do the job by hand - just rub the butter into the dough with your finger tips. This is the biscuit method. It is the same method I use when making my own homemade crackers.

5. I did not make these in my own kitchen. I did not find any round cutter in the kitchen I was in. So instead we just formed the dough into a ball and used a pizza cutter to make wedges.

6. Don't skip the glaze. I added just a bit of it at first, but then after we tasted some, I decided to use it all up.

The scones turned out wonderfully. I am not the biggest fan of orange in baked goods, but it was mild. The best part was how tender they were. These were anything but stones. Nice, moist flaky texture. As for the cranberries themselves, I think you could have easily added more. The best part of all was the princesses attending the tea party all loved them. They didn't leave a crump on the plate!