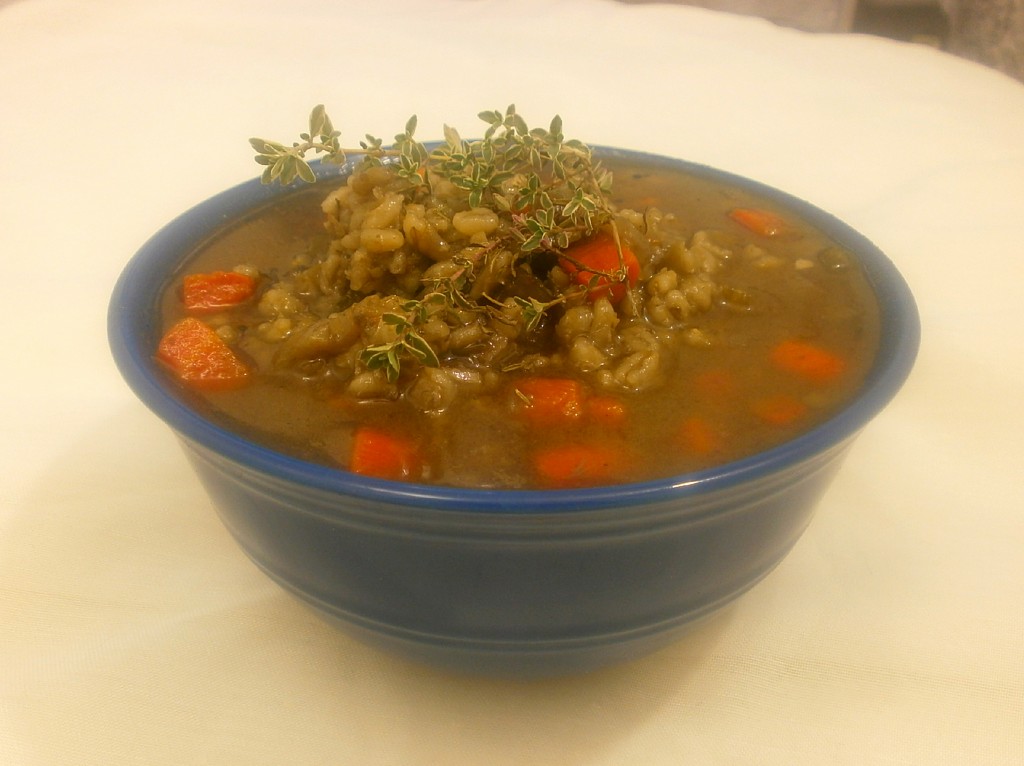 I think often people only think of beef, when they hear the words barley. While barley has many uses, I am definitely all for the beef and barley combo. I have made this kind of soup before, but I am always open to new techniques and recipes. So after an episode of the Barefoot Contessa aired this past weekend, I decided to give Ina's Rich Beef Barley Soup a go. In this episode, Ina visits a fire station planning to serve them a meal right after their fire drill. Along with the soup she also makes sloppy joes, caramel pecan sundaes, and stilton dressing.

This soup is a bit different than you might be use to. She uses oxtails and beef stock to make a rich tasting soup. Oxtails don't have a lot of meat on them, but they do have a lot of flavor. At the end I found the meat to be too tough to actually shred for serving in the soup.

Here are my notes from this recipe. You can print off the recipe at Food Network's website.

1. I picked up some oxtails at the store for $3.99/lb. I was hoping for a bit cheaper but I wasn't going to spend the extra gas to go out of my way.

2. I used my Lodge Dutch Oven to make this soup. It's a great tool for browning meat and cooking soup in.

3. She recommends canned beef stock but I would never use canned. Too salty and the quality is poor. You are better off buying the stock in a carton, using a beef base, or using homemade.

4. I really like that she uses leeks. Leeks are overlooked. I think they have a better flavor than onions (which I know is also in the recipe, but I omitted them)

5. Give your vegetables the amount of time they need to start browning. This will increase their flavor and the overall flavor of the finished product.

6. Unfortunately I was out of bay leaves, but I did have some fresh thyme. I just threw the leaves into the pot without tying them.

7. Ina cooked the barley in a separate pot. I thought this was a waste of energy and pots. I just added them half way through cooking the soup. This also gave them a chance to take on some of the flavor of the liquid.

8. Since I was planning on eating for my meals at work this week, I refrigerate the soup when done overnight. This also give a chance for all the fat to rise to the top, so I could remove them more easily. Plus I always think beef soups taste better the next day!