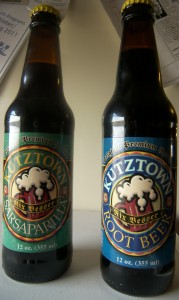 I love root beer and I love sarsaparilla. Both there sometimes is a blurry line between which is which. So I decided to taste a root beer and a sarsaparilla from the same company together. I choose Kutztown for this experiment. But before we get into how these drinks tasted, I want to share what I think the differences between root beer and sarsparilla are.

What is the Difference Between Sarsparilla and Root Beer?

The difference seems to be very simple. They are both are flavored with the sassafras root extracts. However sarsparilla contains a greater percent of this extract than root beer. Root beer has other things added to it, like vanilla, wintergreen, anise to name a few. This is not an official definition and I can't guarantee every soft drink maker is going to follow it, but this is a general rule of thumb.

I tasted them side by side, several times and so did my wife. We could hardly tell the difference between the two. The sarsaparilla seemed to taste a little bit sweeter, despite the fact it actually contains 1 less gram of sugar. Both them had a good flavor and a decent amount of carbonation. I didn't find anything really unique about either of them. They were good, but nothing that I haven't had a hundred times before. I was hoping to find a greater difference between the two flavors, but I didn't. I would love to try this experiment with another company in the future.

I got mine from the Old 52 General Store. They carry over 300 varieties of glass bottled soda that you can purchase online or at their store in Sabin, Minnesota.