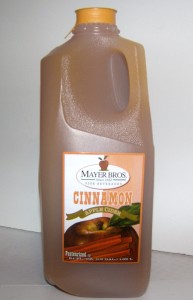 This is part of a series of posts on juices and unique drinks that I have come across. Everyone knows the Pepsis and Cokes of this world and many sites cover the wines and beers, but I am bringing to you the rest of the beverage world.

Apple cider is one of the best things about the fall. I love visiting different local cider mills to try their verison. But in the winter I have to turn to the grocery store to get my cider fix. Recently I found Mayer Bros Cinnamon Apple Cider sitting on a shelf at Busch's in Saline, Michigan. Mayer Bros. has been around for a long time. They first started their mill in 1852 in West Seneca, New York. Ever since then they have been turning out cider to the delight of their customers. You can still visit their mill today. Now they turn out more than just cider. They also offer cranberry blended juices, lemonades, fruit punch, and more.

The ingredients in their cinnamon apple cider include: apples, orange juice, spices, and potassium sorbate. There is no added sugar, it's 100% juice.

I found this cider to be rather average. The flavor of the apples was average, the amount of spice in it was average. It's not that I didn't like, but I think the addition of the orange juice inferred with the true apple flavor. When drinking apple cider, I want to fell like I am drinking an apple, and this didn't give me that sensation. The cinnamon in it added some flavor but I felt there could have been more.