Robert is making over his first restaurant in my home state of Michigan. I didn't realize Robert was coming here. Probably because when he did, my wife was having a baby. Anyway as long as they are still in business I will want to check out Frankie's in Three Rivers in the near future.

This is one of those places that doesn't really have anything going for it. You have two owners who are constantly budding heads, you have a dark, dusty decor, and a kitchen that utilizes microwaves as a main cooking method. Robert raised his voice in the first moments of the show, leading one of the owners to head to the bar for a "break". I also haven't seen a restaurant on this show that had no real identity, except for a train theme. What kind of food is this place suppose to serve? 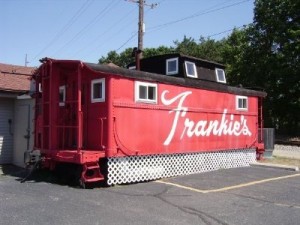 As this is a food blog, not a psychology evaluation I will focus on the food. They have 4 microwaves in their kitchen. The microwave is a good invention. It's the best way to heat up leftovers and a few other applications. However the microwave isn't a cooking source that adds any flavor. Roasting vegetables concentrates flavors, browing meat in a frying pan adds flavor, grilling steak over some charcoal brings a smoky flavor, but what kind of flavor does a microwave bring? It's not real cooking and Frankie's doesn't have any real cooks. They actually didn't even have any pans. Robert had to take out of the design budget to properly equip this kitchen.

Lesson for Home
Equipping your kitchen for success is as important in the home as in a restaurant kitchen. Having the right tools can help you turn you flavorful food in a easier manner. As I have collected kitchen tools over the last couple years I have found that is easier and easier to make delicious food. If you are not sure how to do that check out Alton Brown's book, Gear for Your Kitchen

. It's the best book I have ever found on stocking your kitchen.

Robert teaches them some simple, yet fancy dishes that they were capable of doing. I appreciate Robert's ability to understand the skills of the cooks and meet them where they are at.

Follow-Up
Frankie's is still in business. Food Network reports that their sales are up 39%. Their onion rings that co-owner Tina wanted to keep on the menu as they make a profit with them are getting rave reviews online. Some people are complaining about the prices and portion sizes. This often the case with restaurants Robert has worked on. He ups the ante with the food along with the cost. I hope to check this place out myself when I can make it over to that part of the state.

Check out my other Restaurant Impossible Follow-Ups.

« Growing Indigo Rose Tomatoes - A Review
Pink Pearl Apples - Pink on the Inside! »